Everything About Fiction You Never Wanted to Know.
(Redirected from Super Mario Brothers Super Show)
Jump to navigation Jump to search 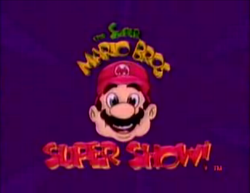 The Super Mario Bros. Super Show! was a 1989 animated/live action DiC production was an Animated Adaptation of Nintendo's flagship games, featuring the adventures of those plucky plumbers from Brooklyn (although Yoshi's Island eventually revealed that they were born in the Mushroom Kingdom), the Super Mario Bros.. Mario is voiced and portrayed live by professional wrestler Captain Lou Albano, with Danny Wells as Luigi.

The show was presented in a Three Shorts style, where one live-action story is split into two parts and straddles an animated short. The live-action short features the brothers in Brooklyn before they were sucked into the Mushroom Kingdom, providing plumbing duties for normal joes (like Dr. Frankenstein) and celebrities (like Lyle Alzado and Cyndi Lauper) alike. The animated short features Mario and Luigi in the Mushroom Kingdom, looking for a way to get home and save Princess Toadstool's kingdom from the evil Bowser.

The show ran four days a week in syndication, with Fridays reserved for a cartoon based on The Legend of Zelda.

Now available on Hulu (Region Locked) Not to be confused with the The Adventures of Super Mario Bros 3 or Super Mario World.

Tropes used in The Super Mario Bros. Super Show! include:
Retrieved from "https://allthetropes.org/w/index.php?title=The_Super_Mario_Bros._Super_Show!&oldid=1832535"
Categories:
Cookies help us deliver our services. By using our services, you agree to our use of cookies.