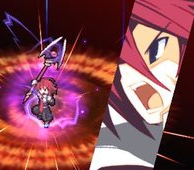 Whenever a video game character uses his Limit Break, a portrait of him or close-up of his face is flashed on the screen just before he proceeds to beat the crap out of his enemy. This allows us to see the determination on the attacker's face that would otherwise be difficult to convey on the character's in-game sprite or model. If the model is detailed enough to convey emotion, then an alternate option is to have the camera temporarily zoom in on the attacker.

When used with an image, this trope is frequently referred to as a "cut-in."