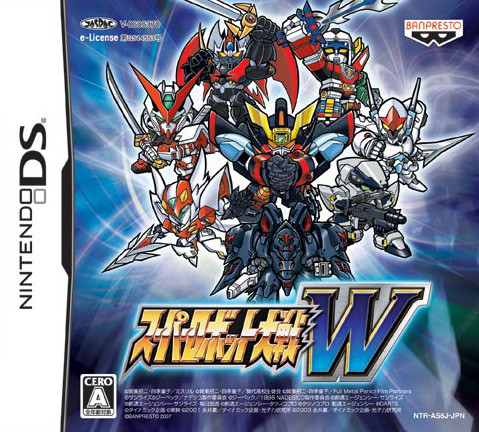 WARNING: Units Not to Scale

Super Robot Wars W is the first entry of the series for the Nintendo DS.

Space Calendar (SC) 99. In the previous age, the governments of Earth formed the Federated Earth Nation (FEN) to bring World War III to an end. After putting down the defiant lunar colony, the Federation Space Calendar was instituted. To alleviate environmental pressures and overpopulation, the FEN began expanding into space, constructing space colonies and asteroid cities, as well as an Orbital Space Ring around the Earth, and the development and terraforming of the Moon and Mars. This was accomplished in a short time, due to quantum leaps in physics and energy research.

But repression of those living in the colonies by the FEN ignited a war between factions in space, and OZ, the true leaders of the FEN. This "Revolutionary War" ended in the year 98, with the death of FEN President Treize Khushrenada. From Treize's will, a New United Nations was formed, returning power back to the individual states.

But the new Earth Sphere's troubles seemed to multiply. The Earth Sphere was invaded by the Radam, who seized control of the Orbital Space Ring, and the invaders known as the Jovian Lizards, who destroyed the Mars Colony. In addition, internal strife, such as the distinction between Coordinators and Naturals, and mechanized terrorism (that is to say, terrorists in Humongous Mecha) seem to be taking the New United Nations to the breaking point. To make things worse, Dr. Hell has begun mobilizing, and has managed to destroy Getter Robo and seriously damage Mazinger Z and Great Mazinger.

To this point, Kotaro Taiga, the head of the Gutsy Geoid Guard, is working together with an old partner of his, Heinrich Freeman of the Space Knights, to work together to face this crisis. To this effect, he has also enlisted the Preventer organization, and is trying to get help from Mithril, Nergal Heavy Industries, and anyone else who is willing to join the fight.

As luck would have it, two Preventer agents happened to have hitched a ride from Blessfield Ardygun, a former Space Pirate and old Worthy Opponent of Taiga and Freeman's who has become a "Trailer" (a kind of spacebourne Jack-of-All-Trades), and his family. They know from first-hand experience that Ardygun happens to carry some serious firepower, so maybe it's time to turn an old enemy into a new friend...

The game uses an engine similar to Super Robot Wars J, and in the case of shared series', many of the same sprites.

Featured series (with debuts in bold):

Note that with the inclusion of Blade and Orgun, this game is, if you'll forgive the pun, of a slightly smaller scale than most other games in the series, with a larger number of units, both friendly and otherwise, in the SS (human-sized) scale. There is also a Transhuman undercurrent in the game, with many characters being genetically modified, Cyborgs, or a combination of the two. This is rather important, given the whole Natural-vs-Coordinator thing SEED brings in.

It is also highly worth noting that the above list is the first time in the entire history of the franchise that all of the listed series are licensed and distributed in the United States, with some (Gundam Wing, Gundam SEED, and GoLion/Voltron) very popular in the American market. Indeed, a few (Voltron and Orgun, which was an early and much-liked Central Park Media release) are not well-remembered at all in their country of origin and seem included primarily to make the game more appealing to an American audience. Despite this, the game is not available in English and no plans have been announced to import the game for localization (and given that the game is five years old now, it is fairly likely it won't be released overseas officially).

Tropes used in Super Robot Wars W include:
Retrieved from "https://allthetropes.org/w/index.php?title=Super_Robot_Wars_W&oldid=1778855"
Categories:
Cookies help us deliver our services. By using our services, you agree to our use of cookies.