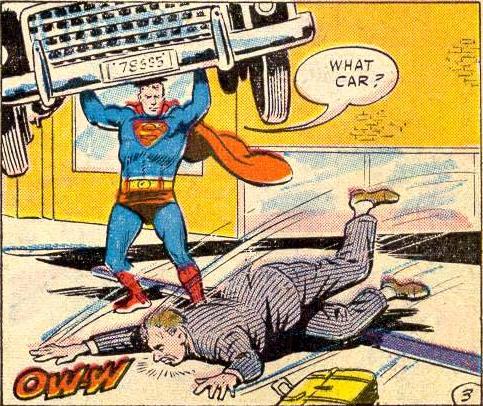 You're a mean drunk, Superman.

Likely the most primal super-power. Super Strength doesn't require any long-winded explanations and it's not at all nerdy.

Very common power from The Silver Age of Comic Books. Usually does not know Kung Fu. Usually, this is the linchpin power of a Flying Brick. Characters with a wide variety of Superpowers will very frequently include this as a baseline ability. Characters with super strength may demonstrate it with a Neck Lift. A must for The Big Guy. This is also the most common Charles Atlas Superpower. It's often revealed to other characters via a Bare-Handed Truck Stop.

See also World's Strongest Man and Required Secondary Powers. Villains show this off with a Neck Lift, Minion Maracas, Barrier-Busting Blow, or Hoist Hero Over Head; heroes do it by being a Load-Bearing Hero. Characters with this power may sometimes not know their own strength. They are often described as having The Strength of Ten Men.

Examples of Super Strength include:

Retrieved from "https://allthetropes.org/w/index.php?title=Super_Strength&oldid=1685865"
Categories:
Cookies help us deliver our services. By using our services, you agree to our use of cookies.