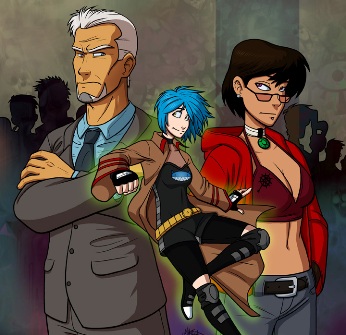 Fiona: "You're the first person to say it that way... back where I belong, I mean. Everyone else says home."
Hall: "Well, it's not the same thing, is it? Only you can know what is home for you."

Supernormal Step is a Alternate Universe fantasy webcomic by Michael Lee Lunsford that updates Mondays and Thursdays. Central to the comic are two universes: our normal 'Verse and the Supernormal 'Verse. Fiona, a blue-haired but otherwise normal girl from our regular 'Verse, is accidentally pulled to the Supernormal 'Verse by two men: Jerkass Jim, who is cursed to transform into a stuffed bunny whenever he does something malicious, and Charmer Van, who is following/helping Jim ostensibly for shits and giggles, but really out of a sense of responsibility.

The comic follows Fiona's efforts to return to where she belongs as well as the effects of Fiona's arrival on the Supernormal 'Verse. Although at first the 'Verse appears quirky and strange, tensions boil between de facto president Cavan Henderson, whose heavy hand is felt through the omnipresence of Henderson Security, and The Nameless, a mysterious anti-Henderson organization with eyes everywhere. Both sides feel that Fiona is vital to their respective causes, but Fiona isn't interested in the problems of a universe she doesn't fully understand. And with the machinations of other strange villains in the Supernormal 'Verse, including the bizarre Mr. Kite, it seems that getting back to the normal 'Verse will be difficult at best.

Fortunately, she has the teachings of her Crazy Prepared dad, her developing combat skills, and a plethora of potential allies, including Hall, an affable Henderson Field Marshal muddling through a troubling journey of his own. With some help, Fiona may yet find her way back to where she belongs - or find her way home.

Tropes used in Supernormal Step include:

Mr. Kite: Whatever. Nothing else left to burn, I'm bored, let's get out of here.

Jules: Come along then. You can be my apprentice... or squire... or... whatever.
Van: What does a squire do, Jules?
Jules: I don't know; he squires. We'll look it up in the dictionary later.

Eva: Hall is off investigating stuff on his own again and being generally nonconformist. Me go do with the sneaky sneaky follow time yes?

Jim: Time to punch the hell out of something!

Eva: And me without my potato peeler.

Akela: I'd say in your dreams, but I'd rather you just die.

Eva: *with the pipe protruding from her chest* Uncalled for.

Random Henderson: Was that English?

Dave: Wh-what did she just say?
Jim: Were they even words?

Fiona: Fill me in later when you can control your accent!

Daisy: *flinging her hands in the air* Ah! Massive downer! We need to fix this ASAP!

Eva: *flinging her hands in the air* Book!

Van: *about his sneaking out* Where did you think the piercings and tattoos came from?
Jules: I... thought you might have done them yourself? I'm less impressed now.

Some guy. He's got some motive. Nobody really knows what that is.

Jim: *on helping Fiona after generally ruining her life* Fine! Once again, let's detour from my original problem!

Van: You don't get how magic works? It- It's magic!

Hall: It's called being nice to the citizens; you should try it.

Lunsford: Think more unreasonable, like he came back from the store and told her they were out of strawberry.

Beatle: Trust me when I say plans B through 19 were completely insane.