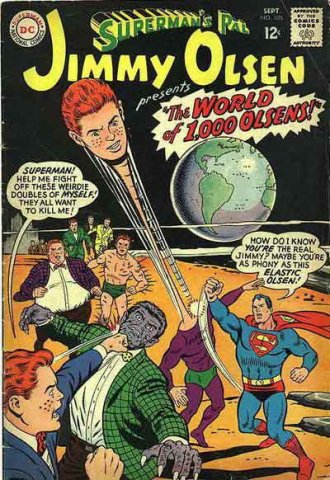 From the diary of James Bartholomew Olsen:

"Dear Diary,
I became Turtle Boy today. I was better than last time; I only fell on my shell once and a nice man was there to flip me over. I don't know quite what set it off -- the radioactive meteorite I was investigating or that mystical talisman my girlfriend gave me.
It was certainly better than yesterday: a combination of Omega Radiation and a kryptonite candle turned me into Melting Lad. I really don't understand how melting is a superpower, but I was a puddle for half the day. Superman had to use his super-sculpting skills to put my atomic structure back together. I have to remember to get him something good for his birthday. Maybe a tie?
Well, tomorrow is a new day. Let's hope I don't get any more weird or wacky powers -- I don't know how much I can handle, to be honest. It's never just super-strength or flight, it's always something weird, like lycanthropy or becoming super-fat (again, how is that a superpower?).
Tomorrow looks to be better, though, diary. I only have one assignment with Ms. Lane: to photograph STAR Labs' new particle decelerator. Here's hoping there are no mishaps.
Until tomorrow,
Jimmy."

Where an Unfazed Everyman is a normal person surrounded by weirdness, but who stays normal nonetheless, Superpower Silly Putty is a Sister Trope describing someone who is transformed by the weirdness. Numerous times. They never keep the powers, however; the sap always manages to lose them just as they're getting used to them. Don't expect 'em to know exactly how to use them during the duration, either.

This trope was one of the hallmarks of the Silver Age of comics, and is pretty much a Dead Horse Trope in that genre by now.

A subtrope of Superpowers for A Day. Not to be confused with Plastic Man, a literal Silly Putty superhero.

Examples of Superpower Silly Putty include: