Sure, Let's Go with That 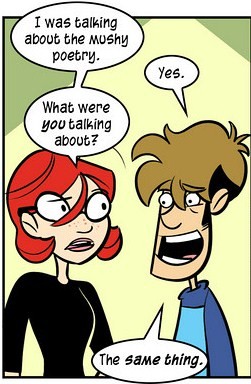 Giraffes. He was talking about Giraffes.

Alice has been acting suspicious. Bob knows she's up to something, watches her, and...comes to the wrong conclusion. He confronts Alice with what he thinks he knows, and Alice, to keep him from discovering her real secret, lets Bob think he got it right. May lead to a Maintain the Lie to keep Bob from catching on.

Sometimes Bob confronts Alice with a vague phrase like "I know your secret", and each of them thinks the other is talking about something different until Bob (it's always Bob) comes right out and says what he thinks the secret is.

If this manifests out-of-universe, such as a work's author replying to fan speculation with a "sure, let's go with that" and making it Canon, see Ascended Fanon.

Examples of Sure, Let's Go with That include:

Retrieved from "https://allthetropes.org/w/index.php?title=Sure,_Let%27s_Go_with_That&oldid=1685022"
Categories:
Cookies help us deliver our services. By using our services, you agree to our use of cookies.