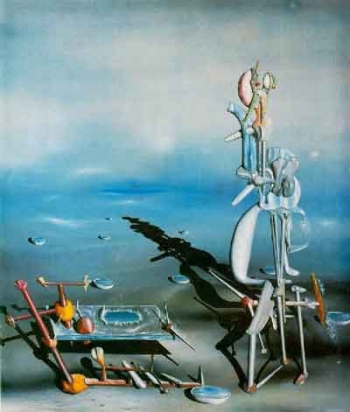 Surrealism was a movement encompassing both literature and art, originating in Europe between the World Wars. The aim was to make art that reflected the fundamental truth about the world; they took the name surrealism (the prefix sur- means "super") because they considered themselves super-realists. They were also huge fans of Sigmund Freud, whose psychoanalysis was the hottest fad of the decade, so the surrealists' super-realism was essentially art about the subconscious, as Freud envisioned it.

One major branch used very abstracted art to symbolically represent the subconscious. The other, better-known, branch attempted to more-or-less literally depict the strange logic of one's dreams—this was the surrealism of Salvidor Dalí's melting clocks and René Magritte's flying men in bowler hats.

Due to the popularity of the latter branch, the definition of "surrealism" drifted. People remembered the melty clocks, but forgot they came from the subconscious, so for those outside the movement, "surreal" became a synonym for "bizarre and nightmarish".

If the world looks mundane but Fridge Logic makes you wonder why people aren't making more of a fuss about some of the stuff going on then it's probably Magic Realism—which is actually a later offshoot of Dalí-style surrealism.

Surrealist art contains examples of
Retrieved from "https://allthetropes.org/w/index.php?title=Surrealism&oldid=1616984"
Categories:
Cookies help us deliver our services. By using our services, you agree to our use of cookies.