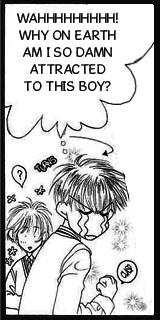 No matter how flawless the Sweet Polly Oliver's disguise at fooling her male peers, there is some primordial part of a man's brain that sees through the disguise... and is attracted to their new drinking buddy.

This is especially true for the Casanova, whose refined "babe-dar" can detect estrogen even when the eyes can't. Of course, this will get very confusing and distressing to the unwitting male admirer. They'll be turned on and not know why, and if they're not too bright might say "have I met you before?" (which they have, only as a woman).

Expect the poor lech to have a lot of sexual confusion about his "feelings" for "another guy", and be incredibly relieved when she stops masquerading. Polly Oliver, if not oblivious to her effects, will (depending on the jerkiness of her admirer) feel guilty or gleeful. If she would normally pursue this guy romantically, she may reveal the ruse to mixed relief and feelings of betrayal.

It's rare for the man to actually be gay or bi in this situation. However, it's more common (especially in Shakespeare) for a woman to fall for "Oliver" and only give up when the disguise is revealed or, these days, to not care.

Compare Attractive Bent Gender, and Unsettling Gender Reveal (for when finding out the love interest's actual gender makes them the wrong orientation). A subtrope of Gender Reveal.

Examples of Sweet on Polly Oliver include:

Retrieved from "https://allthetropes.org/w/index.php?title=Sweet_on_Polly_Oliver&oldid=1923569"
Categories:
Cookies help us deliver our services. By using our services, you agree to our use of cookies.