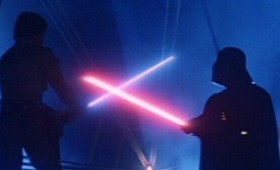 Rapiers, Cutlasses, Katanas, Laser Blades, whatever. At times, a goodie and a baddie just have to have a one-on-one fight, with Swords.

In any given story, the main character is fairly likely to be somewhat proficient with a sword. In video games, anime, and certain scifi-fantasy stories, indeed, large segments of the population prefer swords as their primary weapons, over any firearms that may be available. This is true even in many cases where it would be far more intelligent to use a firearm.

Bonus points when it's a modern setting, and using a blade provides almost no advantage and the hero is far less likely to possess the training needed to use a sword.

Exactly why this is the case varies. In some settings, swords offer advantages that guns do not. Perhaps the predominant defensive system is effective against firearms and not against blades, a la Dune. Or perhaps the people using swords or edged weapons are just that cool, a la the Jedi. Sometimes the enemy is invulnerable to conventional weapons—and it's fairly rare that the Ancient Tradition had advanced knowledge of firearms. And of course sometimes it can be a prearranged fight that has swords as part of the rules: guns never made fists obsolete, so why should they make swords so if young bloods want to settle their quarrels with them? Sometimes, of course, it is left unexplained.

A similar trope results when two characters choose to battle each other with their bare hands, for absolutely no reason at all. Even if one of them (usually the hero) has a gun, he will throw it away, preferring the visceral satisfaction (and added chance of failure) of beating his rival's face in. Again, this has no practical value in nearly all cases.

Unfortunately even when use of swords is justified it is usually done unrealistically. As a result of choreography safety guidelines - that minimize hazard to actors - as well as a dismissive attitude toward earlier weapons - going back to late 19th century fencers - led to a wide acceptance of the unrealistic image of sword play. The weight and lack of handiness of these heavy swords was grossly exaggerated and sword play depicted as a slow and ponderous affair where raw strength is the deciding factor.

Examples of Sword Fight include:

Retrieved from "https://allthetropes.org/w/index.php?title=Sword_Fight&oldid=1934461"
Categories:
Cookies help us deliver our services. By using our services, you agree to our use of cookies.