Everything About Fiction You Never Wanted to Know.
< Sym-Bionic Titan
Jump to navigation Jump to search 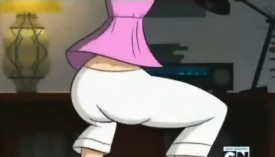 Shake it, bake it, booty quake it!

Engage, the most unsubtle, excessively suggestive piece of programming ever to come to Cartoon Network before Adult Swim since Time Squad! and Regular Show