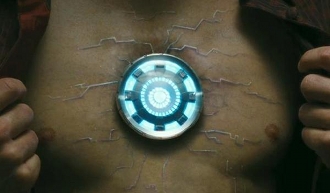 Who'd have thought putting an experimental clean energy source in your chest might have harmful side effects?

In general, the tendency of people suffering some sort of abnormal condition to develop highly visible, off-color veins all over their body or near the distressed areas.

Might be due to catching a bite from someone/thing infected with The Virus, or as a manifestation of a villain's Red Right Hand after willingly succumbing to The Dark Side or The Corruption. It's also possible if the character is suffering a Superpower Meltdown, Power Degeneration, or as a side effect to taking too much Psycho Serum. A vampire, werewolf or other supernatural critter hit with Depleted Phlebotinum Shells inducing a burning reaction (or even just partial sun exposure/blood starvation) may develop Tainted Veins because their glamour is failing. Special mention goes to zombie bites for always creating nasty necrotic veins wherever they bit.

Expect characters with a Healing Factor (or with friends possessing Healing Hands and or a Magic Antidote) to quickly and neatly reverse the appearance of these veins.

See also Volcanic Veins for when they glow. Compare Vein-O-Vision, which is where a character has a power that makes them see the world this way.

This is a Justified Trope (Tropes Are Not Bad): There are toxins that cause venous thrombosis (clotting of blood in veins) which can make surface veins visible and dark - especially if the clotting is in deep tissue in an affected limb. For sake of Squick control on the main page, Real Life examples should go in the Real Life section.

Examples of Tainted Veins include:

Retrieved from "https://allthetropes.org/w/index.php?title=Tainted_Veins&oldid=1621330"
Categories:
Cookies help us deliver our services. By using our services, you agree to our use of cookies.