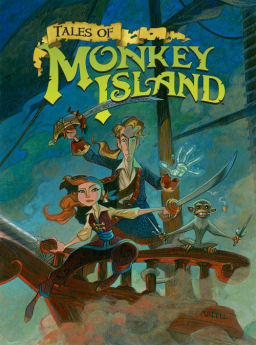 I've sailed the seven seas in search of archaic charms and curiosities; I've raided the sunken smelters of Popgowatu for the finest of tools; and I've worked by candlelight in the yawing quarters of my ship to forge together the raw materials into the finest of blades, all to finally put a bloody end to my undead rival and stealer of spouse. It is now that this sword is more than just a sword; it is a covenant! I'm not exactly sure what that word means, but it sounds right. The seas will sleep soundly tonight, for LeChuck's time is up!
—Excerpted from The Memoirs of Guybrush Threepwood: The Monkey Island Years

Tales of Monkey Island is a 2009 video game, developed by Telltale Games. It is a five-part episodic game and the fifth in the Monkey Island series. The game begins at the conclusion of Guybrush's latest, unseen adventure: the player guides him as he once again defeats LeChuck with an improvised piece of voodoo weaponry, only to turn the villain human again, release his concentrated evil as "The Pox of LeChuck" (which infects Guybrush's own hand) and maroon himself on Flotsam Island. All in the first chapter!

Not to be confused with the early 80s adventure series Tales of the Gold Monkey.

Tropes used in Tales of Monkey Island include:

Guybrush: [to the MerLeader] Actually, there is one thing. I sorta caused this Pox and I need Esponja Grande to fix that. Especially now.
Elaine: [under the influence of the Pox] What do you mean by that, you worthless piece of *cough cough cough* ooh, excuse me.

Guybrush: Now listen here, ya fleshy sack of chum, you'd better be handin' over that golden sea turtle or I'll be handin' ya yer liver on the pointy end of me hook!

Winslow: [under the influence of the Pox] Listen here, you poor excuse for a prissy privateer! Any more lip out of you, and the Captain'll be sending yer carcass on a tour of the small intestine!

Grindstump: The defendant will cease his inane histrionics, or the court will be forced to [growls a bit before he becomes Pox-enraged] YANK OUT HIS TONGUE WITH A RUSTY SHRIMP FORK! ARRR!

Guybrush: How're sales going?
Stan: Great! Celebrity merchandise is always a good investment, especially if you suspect that the celebrity in question is about to become a wind chime in the gallows! NOTHING sells like dead celebrities.
Guybrush: Yeah, well, I don't plan on dying today.

Voodoo Lady: "Don't touch that! It's where I keep my... unmentionables."
Guybrush: "Gewghh...."
The closet then renames itself "The Scariest Closet in the World".

Guybrush: How about the mountain of ice on the rollercoaster of the damned? She was behind THAT?
LeChuck: ESPECIALLY that.

Voodoo Lady: [I never gave my name because] Names have power, Guybrush Threepwood. Only a fool willingly gives it away.
Guybrush: Does my name have power?
Voodoo Lady: Er, sure. Why not?

Guybrush: [in his pretend voice] Foolish Power Pirate! Your porcelain parts will be sacrificed to, um, Bob, the Lord of the Seas! [switches to a pretend high voice] Arrrr! Me kidneys! [takes the action figure back from the altar]

Guybrush: Would you mind releasing my wife? She gets a little cranky when she's tied up for more than an hour or so.
LeChuck: YOUR wife? Nay, Elaine is destined to be MY bride!

Guybrush: Destiny, schmestiny, Elaine's MY wife, and she's not marrying you.
LeChuck: Ye be starting to get on me nerves, Geekwood. Elaine?
Elaine: [impatient] Oh, for pity's sake. Just run him through with the cutlass so we can all go home.
LeChuck: [smiles] As you wish, my love.
Guybrush: I'm pretty sure she was talking to me.

Guybrush: Listen. See this ring? It means that Elaine and I are married. Hitched. Cohabitating. Eternally betrothed. Till death do us part. Got it!?
LeChuck: Till death do you part, eh? We'll have to do something about that.

Guybrush: I've told you a million times, LeChuck, I'm already married to--
LeChuck: "Till DEATH do you part," Threepwood! And that part has already been taken care of!

Guybrush: If you did anything to hurt Elaine while I was gone, I swear I'll--
LeChuck: The only thing I did to Elaine was to pull her from the freezing water along with a bunch of wet, screaming monkeys!
Guybrush: [smiles] Actually, that kinda sounds like our honeymoon!

Guybrush: I love the smell of treasure in the morning!

Guybrush: I hope it doesn't keep me in stitches or I might need a... Sturgeon!
Tetra: I hate you now.

LeChuck: Out of respect for the newly-deceased, I feel I should point out that you wave your sword like a dairy farmer.
Elaine: How appropriate... you fight like a Pox-infected undead cow.*sword clash*

Guybrush: Sooo... you say you're human now, huh? Well, [snaps his finger] let's just see what happens when I ...PULL OFF YOUR MASK!! [jumps at LeChuck's face]
LeChuck: Owwch!! Guybrush, stop that! [pushes him off]
Guybrush: [understands] Huh. Okay... maybe you are human. I still don't like you.
LeChuck: Be that as it may, we still must work together to retrieve this Summoning Artifact!

Guybrush: My possibly dead mother could shoot a cannon better than you can!

LeChuck: "Burn down every island in the Caribbean if you have to, but bring me my bride! AND MORE SLAW!"

Guybrush: Want me to get anything from the hold? I've brought some pot stickers!
Elaine: [screams in annoyance] No! Finish! The! Recipe!

Guybrush: Elaine!
Elaine: Guybrush? [monkey does a Face Palm before the fuse hits the gunpowder barrel and blows them all sky-high]
Guybrush: LaFlay!!!

[[spoiler:LeChuck: Does Elaine know about Morgan, Guybrush?
Elaine: [looks at LeChuck] What?
LeChuck: [turns to Elaine] That sultry sea-minx had it for Threepwood! Her corsair sailed for only him! [turns back to Guybrush, smiling] A pity I had to kill her! But now they can kindle their love [turns angry] in hell! [punches Guybrush]]]

Guybrush: My assessment of your cannon-operating skills, not to mention your personal appearance, odor and intelligence, is that you are unmistakably inferior in each of those criteria.

Giant Manatee: (Um... hi.) [no response, then turns to Guybrush] (This is a bad idea.)
Guybrush: [repeats] (This is satisfactory.)
Giant Manatee: [annoyed] (Stop saying that.)

LeChuck: Ha ha ha! You see!? You can temporarily destroy my body, Elaine, but you cannot damage me spirit! *a ghostly Morgan promptly stabs him with a ghost sword* OW, my spirit!

LeChuck: Do ya mind? I be in the middle of an unholy ceremony here!
Guybrush: Unholy THIS! *attacks*
Elaine: "Unholy this?"
Guybrush: Yeah, I know, but he didn't give me much to work with...

Guybrush: LeChuck! My new best pal! How'd you get out of jail?
LeChuck: Oh, the guard was more than happy to release me once I convinced him that it was the only way to win Elaine's hand in Unholy Matrimony.
Guybrush: [confused] Wait. Unholy what?
LeChuck: Unholy THIS! *stabs Guybrush with the Cutlass of Kaflu*

[[spoiler:LeChuck: I know you've developed feelings for me... join me as my demon bride and together we'll lay a bloody siege to the very heart of voodoo itself!
Elaine: Go to hell, LeChuck.
LeChuck: Well, you can't say I didn't try... Looks like we'll be doing this with all that voodoo]]...

Guybrush: Tell me where I can find the Tongue of the Manatee or it's time for Tibetan Tickle Torture.

Guybrush: Can't you two just work it out over a nice grogatini?
Morgan: THE Guybrush Threepwood is buying me a drink?
Elaine: Over your dead body, trollop!
Morgan: Who are you calling trollop, Schooner-Mom?!
Guybrush: [embarrassed] Oh boy.

Winslow: I'll keep an eye on Miss LeChuck. If she stirs, I'll give her the old scurvy buttons!
Guybrush: [disturbed] I don't want to know what that is.

Guybrush: If I plead guilty, will I get out of here any quicker?
Judge Grindstump: Most definitely--
Guybrush: Great! Then I plead--
Judge Grindstump: [interrupts] After the summary executions by keelhauling, hanging, boiling, and, eh, em... scaphism. [the crowd laughs]
Guybrush: [confused] Scaphism?
Stan: Trust me, kid, you don't want to know.
Guybrush: Okay, then...

Your mama's so fat, it's probably a serious health risk for her. She might want to visit a physician about that.

Guybrush (as Defense Attorney): Where were you the night of August 15?
Guybrush (as witness): I was on a date - with your wife! (cue Guybrush beating himself up)