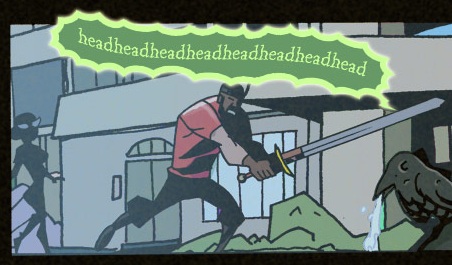 It knows what it wants. No, not that.

As a weapon, Lilarcor has its uses, but many a warrior has eventually given it away. Banter such as "Ouch, that musta hurt", "Oh yeah! Got 'im good", and "Beware my bite for it might...might...might really hurt or something" is a constant barrage on a warrior's psyche.
—In-game description of Lilarcor, Baldur's Gate 2

A weapon—usually a Cool Sword--that talks. Some combination of Empathic Weapon, Evil Weapon, and Exposition Fairy may apply.

It might get annoying, though. If the weapon won't shut up, the wielder may feel Blessed with Suck.

Examples of Talking Weapon include:

"What I'd really like is to be a ploughshare. I don't know what that is, but it sounds like an existence with some point to it."

It was in this battle Ogma found Orna, the sword of Tethra, a king of the Fomor, and he took it from its sheath and cleaned it. And when the sword was taken out of the sheath, it told all the deeds that had been done by it, for there used to be that power in swords.[1]

Minsc: I have often asked him: "Larry, why are you Minsc's sword?" And he always says...
Lilarcor: Because you've got the grip and I've got the rip! Mwahahahahahahahaha!

"Good morning, Master. Who shall we kill today?"

Basically, the more powerful a sword is and the more useful it would be for a PC to be in control of all of the fantastic abilities it can grant, the more Ego the sword has, the less likely it is to acquiesce to demands to use those abilities, and the more likely it is to talk back and be generally annoying at the worst possible moment!
Is that the perfect game mechanic or what? Gary, we are humbled by your boundless game mastering genius.

Piggy: Can you believe this?