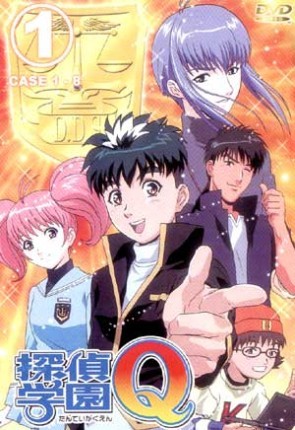 Detective School Q or Tantei Gakuen Q is a 22 volume manga by Seimaru Amagi that ran from 2001 to 2005. It was adapted into television in 2003, albeit incompletely, spanning a mere forty-five episodes covering only the beginning of the manga, leaving out most of the plot. Later, the series was also adapted into a live action drama.

This story involves a group of students called the Q class of Dan Detective School, founded by Retired Badass Detective Morihiko Dan, the best detective in Japan. These students, led by Kyū Renjō, form a Five-Man Band and are task to solve seemingly unsolvable mysteries, as well as to battle a criminal organization led by Pluto who had a past with Morihiko Dan and a mysterious connection with one of the students...

Now has a character sheet that could really use some love.