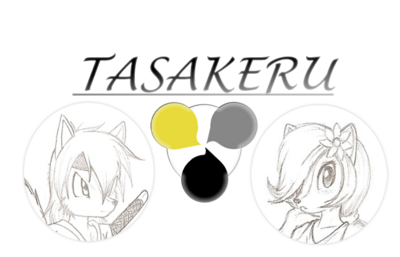 Tasakeru is an ongoing Web Serial Novel series written by BHS. Planned as a series of 24 short books, the aim is to prove that a really good story for teens and young adults can be written with a Petting Zoo People cast. Think "Redwall, but grown-up". The site updates about once a month, except for December.

The story takes place in an Alternate Universe, on an Earth where humans have never existed. With humans absent, various mammal species have evolved into intelligent, civilized creatures called "sentients". On a small island in the middle of the ocean, eight sentient species have evolved, and have clashed with one another for thousands of years. The story takes place during a period of uneasy truce, in which the island's only city enforces order by permanently banishing any "dangerous elements" to the uncharted forest on the island's eastern side. Those that are banished call themselves Outcasts, and the story is about a multi-species group of these exiles, fighting for survival. In time, though society has rejected them, the Outcasts will become critical to the survival of their species, their homes, and everything that they know.

And as if that weren't enough responsibility, things get even more complicated when they find out that one of their number has been chosen to enact the role of a God...

Now has a character sheet, still in progress.

BHS is also the author of another work, an Intercontinuity Crossover fanfic called Stars Above, co-authored by User:Forzare.

Tropes used in Tasakeru include:

If you haven't figured it out yet... the password is "ravager".

Retrieved from "https://allthetropes.org/w/index.php?title=Tasakeru&oldid=1867815"
Categories:
Cookies help us deliver our services. By using our services, you agree to our use of cookies.