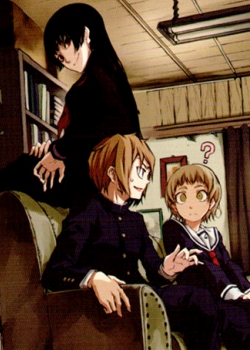 I don't mind UFO's and ghost stories, it's just that I tend to give value to the storyteller rather than to the story itself.
—Robert Stack

Tasogare Otome x Amnesia (aka Dusk Maiden of Amnesia) is a tragedy/horror/supernatural/shounen/mystery/romance/ecchi manga by Maybe (and yes, that's the creator's name).

Kanoe Yuuko has been a ghost in the Old School Building for a long time without being able to make contact with the living, until first-year junior high student Niiya Teiichi came along. Now they try to solve the mysterious circumstances under which Yuuko died, hindered by the fact there are at least seven different ghost stories about the school, some of which are possibly based on distorted accounts of her death.

An anime adaptation by SILVER LINK is currently airing as part of the Spring 2012 Anime.