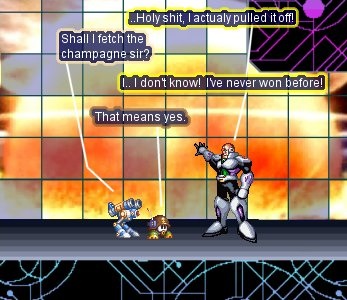 The shortest and simplest answer is that they got their act together-- really together—and are now a threat. As to "why", the Author wants to shake the heroes and viewers out of their comfort zone by allowing the bad guys to win round one so the heroes will be forced to get their act together and make their next encounter a truly epic fight. These third string villains undid the Villain Decay that put them at the bottom of the Sorting Algorithm of Villain Threat by going through Training from Hell, using some kind of Upgrade Artifact or Artifact of Doom, or are under the effects of a Villain Override. Another possibility is that they catch the heroes off guard. Maybe Team Harmless Villain was Not So Harmless all along, and have been pretending to be weak to lull the heroes into complacency (which warrants the question, why didn't they just kill them on the spot?)

If neither is the case, it may be that they have both traded places in the story—if the heroes do a Face Heel Turn and the bad guys make a Heel Face Turn due to a Mirror Morality Machine, they will "cosmically" get the power boost needed to make sure good comes out on top, they are the Invincible Heroes now.

Speaking of role reversals, if the Quirky Miniboss Squad joins the heroes in an Enemy Mine situation where they both fight for a good goal, they'll no longer be under the same "bad guys always lose" onus, and remind us why they were, Once Upon a Time, relevant as they bash the Eviler Than Thou new threat.

Likewise, new characters in the show may be introduced as Distressed Damsels being beaten by the Goldfish Poop Gang so that the heroes can come to their aid. It also serves to show us how pathetic they are and feel to lose to these guys. Afterwards, with some confidence boosting pep talks from the heroes and combat training, they will solo their temporary tormentors and make them A Twinkle in the Sky. Similarly, a Tournament Arc allows most Quirky Miniboss Squads the chance to win a few matches to remind us they don't completly suck, only to then go down to a bigger threat.

At any rate, you can expect a hero or one of the squad members to finish by asking "So... what now?

See also The Bad Guy Wins (which is an Ending Trope). Contrast Big Bad Wannabe, which may at times overlap.

Examples of Team Rocket Wins include:

Retrieved from "https://allthetropes.org/w/index.php?title=Team_Rocket_Wins&oldid=1706157"
Categories:
Cookies help us deliver our services. By using our services, you agree to our use of cookies.