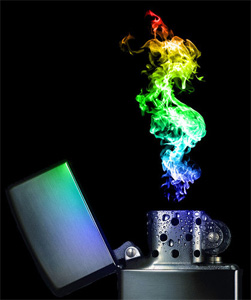 Fire in Real Life is mostly a mix of reds, yellows, and oranges. In fiction, fire occasionally shows up as a different color, either to show that the fire is "unnatural", has different capabilities, or just plain Rule of Cool. Green and blue flames are the most common. A few common variants are when Ghosts and illusionists will usually create blue Cold Flames or when those Playing with Fire make their pyrokinesis distinctive by having it burn a different color.

This is actually Truth in Television: flames will appear blue if they reach high enough temperatures, and many pure elements burn in colors other than orange (Copper, for example, burns green). The latter is a commonly used method of discovering the chemical composition of a substance (called a flame test). However, it should be noted that while fire can be made to burn most any color with the right chemicals, including colorless, a truly black flame is physically impossible[1] (Granted, most black flames are done through magic...)

Examples of Technicolor Fire include: