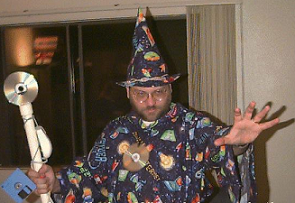 The Techno Wizard is the guy or girl who can make a computer or electronic device do anything.

Among other things, they know all the Magical Databases; they know how to use the Enhance Button and the Facial Recognition Software for the best results; they can look at a wall covered with Billions of Buttons and immediately figure out which unlabeled one is the one that turns off the Self-Destruct Mechanism; they can jury-rig an iPod into an Everything Sensor.

They may or may not be a Mad Scientist as well, depending on how fantastic the show is. They will often have Machine Empathy, especially for devices they use regularly.

Compare the Gadgeteer Genius, who is more mechanically-inclined than electronically-inclined, and the Technopath, who is capable of performing literal magic with technology.

Examples of Techno Wizard include: