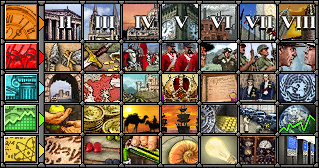 In Hollywood, people seem to believe that technology starts at fire and ends in people turning into energy; the interim would follow the exact same steps on every possible world. Often, this takes the form of people not from Earth creating exact replicas of Earth technology right down to the last detail—such as interface panels ripped right out of the Apollo missions on an alien space station. These copies are often similar enough that people who are from Earth often have no trouble at all using the device, or even interfacing their own hardware with it.

Similarly, seemingly distinct, diverse technologies will always develop at the same rate. An alien world with 'renaissance' era technology (ignoring for the moment that the renaissance spanned four centuries and giant changes in technology) in, say, firearms, will also posses lenses, ships, building materials and mathematical principles identical to those that Earth (read: Western Europe) possessed along with said firearms.

It's only rarely that a civilization will break off the path, and usually as a result of external forces providing them with something outside their capabilities (intentionally, accidentally or incidentally), such as a 1920s planet with fusion power, or a 1700s planet with radios. However, mastering this technology does not actually give them an understanding of related concepts, or even concepts which would be required to use this technology in the first place. (Thus averting Possession Implies Mastery)

The common downplayed versions use either several fields with their own levels, or a Tech Tree with a single "trunk" line of prerequisites for other advancements.

Remember, don't think path, think tree, just as with the evolution of biological lifeforms. Except, in this case the distant descendants of unrelated branches can inspire and influence the future of others. For inspiring viewing, see the James Burke documentary series Connections, which shows the sometimes ludicrously unlikely places where inspiration and discovery come from, and the web-like connections between seemingly-unrelated inventions.

I, for one, can only look forward to the day that crystal-based technology paves the way for our conversion into energy.

Has some actual reference in the real world Kardashev Scale (how much total energy one get to play with, no matter how). The other wiki used to have a list. See Abusing the Kardashev Scale For Fun and Profit for some fun speculation.

Examples of Technology Levels include: