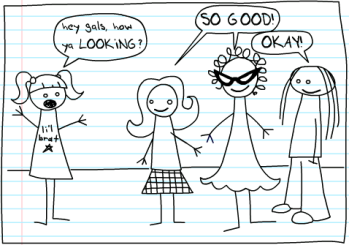 I mean SO GOOD!

Teen Girl Squad is a spinoff sub-series of Homestar Runner, in which (canonically) Strong Bad draws, in comically bad style, a stick-figure cartoon depicting the misadventures of four "teenage girls between the ages of thirteen and nineteen". The main characters include Cheerleader (the de facto leader of the group, an Alpha Bitch wannabe whose popularity is all in her head), So and So (an overachieving brainiac who lacks common sense), What's Her Face (the cynic of the group, as well as the token poor person, and by far the least popular of the four girls), and The Ugly One (who seems to possess suspect hygiene and a strained relationship with reality among other things, but is more popular than What's Her Face).

There are fifteen toons in the main series, and a number of other appearances elsewhere (most notably, the first three episodes of Strong Bads Cool Game for Attractive People each feature an exclusive TGS toon, the first two of which are interactive).

Generally speaking, the characters go on various bizarre misadventures, which usually lead to them dying or otherwise being affected in very strange ways (usually announced loudly) in every episode, which include such things as...

The series is best known for spawning several minor memes, including "ow! my [something unusual]!", and being pwned by something with the caption "[said something]'D!", "It's over!", and others. It also makes fun of various stereotypical high-school/teen/young-adult activities, such as prom, sweet sixteen birthday parties, and Valentine's vamlumtimes day, with a gradually increasing ratio of directed, ridiculing humor to simple absurd humor.

A (so far oneshot) spinoff of this spinoff was created based on the several characters named "Greg" in the series. 4 Gregs is a misadventure of four such characters who each embody some sort of nerdy/geeky/dorky stereotype.