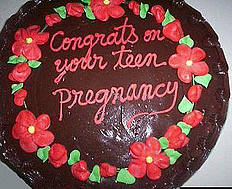 A stock plot. The pregnancy of a young girl is a problem in the story as long as she hasn't finished her education, maturation of body and mind and isn't in a stable relationship. The actual age at which the pregnancy isn't an "issue" anymore therefore varies according to these factors.

This trope is Newer Than They Think: sure, it's Older Than Steam, but it hasn't hardly been universal throughout human history. Once upon a time, adulthood was determined solely by physical maturity: a girl who had had her first period was considered a weddable adult, regardless of how many years she had lived thus far. Men were judged by slightly different standards; Native American boys were considered "men" after they made their first kill, for instance, because proving you could hunt was a sufficient economic standard of maturity. In other words, there was no such thing as "teen pregnancy" because there was no such thing as "teen"—either you were a child or an adult, no in-between.

...Okay, let's rephrase that, because obviously you could be a teenager back then (being between the ages of 13 and 19). But the thing about no-in-between stands. That phase of life—perhaps better described as "adolescence"—is when you have reached physical maturity but not economic maturity; when you could conceive a baby but would have trouble putting food on the table if you did.[1] The nearer you get to the present day, the longer this period of adolescence gets, due to increasing health standards (and thus quicker onset of puberty) on one side and increasingly complicated education standards on the other.[2] Most places won't hire you full-time until you're 18; many want a college education, meaning you'll be 21 before you can draw a meaningful paycheck. Average age of first menstruation in American girls (according to The Other Wiki)? 12.

Usually the result of adolescents fooling around without protection or not fully understanding the biology and mechanics at work, though in particularly dark works, it may be the result of rape. Oddly, the latter is, if anything, more likely to make the pregnant girl a target for Alpha Bitches, unless she was one and the rape was karmic justice. Another big part of this trope is becoming pregnant the moment a girl loses her virginity, this keeping her sympathetic and implying that she was a good girl who had to be talked into sex. Sometimes she doesn't even know she's pregnant.

The typical fictional teenager generally tries to hide her pregnancy from her parents for as long as possible, which never actually equates to "when she starts looking visibly pregnant". This may ultimately result in a Prom Baby. When hiding it from others besides the parents see Stigmatic Pregnancy Euphemism.

Since Status Quo Is God, most earlier works will have the young mother suffer a Convenient Miscarriage or else put it up for adoption (if this is a soap opera, you can count on the child returning to find his or her real parents as soon as he or she reaches adulthood, which usually takes about ten years). This latter plot can even affect shows that don't have long enough runs to see the teenage mother grow up, as an adult character can be revealed to have given up a child for adoption as a teenager.

Sadly Truth in Television, to many, many girls. This has recently become MTV's primary show content.

Examples of Teen Pregnancy include:

Retrieved from "https://allthetropes.org/w/index.php?title=Teen_Pregnancy&oldid=1924016"
Categories:
Cookies help us deliver our services. By using our services, you agree to our use of cookies.