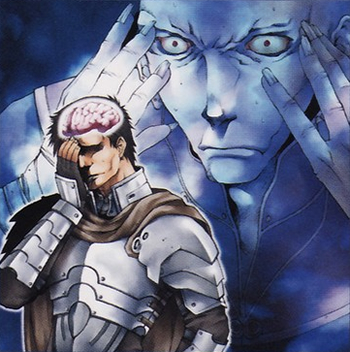 I'M IN UR MIND, HAXIN UR THOUGHTS!

Telepathy/Mind Reading is a psychic power that allows a character to read another person's thoughts and/or communicate with them mentally.

At its most basic level, it functions as a short range radio, allowing the character to pick up the thoughts of those around him. Sometimes, it has limitations such as touch or proximity, or only being able to 'hear' rather than 'see' thoughts. A common hurdle comes from being unable to probe deeper into the minds of those around them, as well as being something of a Fainting Seer whenever an especially strong willed or horrifying character is around. Psychic overload is also common in crowds, represented by a Psychic Nosebleed. Being a passive receptor and not being able to shut other people's thoughts out can easily drive a psychic insane, making this potentially Blessed with Suck.

More advanced uses of telepathy involve receiving and transmitting thoughts and memories, and probing beneath surface thoughts into memories, or outright going into a Journey to the Center of the Mind or dream travel. Some telepaths may be able to use Astral Projection, or at least see through other people's eyes.

At its strongest, a telepath will be able to Mind Control others, sometimes even to the point of possessing their bodies, create Fake Memories after applying Laser-Guided Amnesia, create a Split Personality and let it take over, or in general be a terrifying god who can Mind Rape their opponents.

It's worth noting that for the above reasons telepathy is one of the most potentially pervertable powers, since it's basically an invasion of privacy of the worst kind. The telepath is the sighted man in the kingdom of the blind, and provided he's discreet he can know everyone down to their most intimate detail, and can use them accordingly. This is a lot worse when he's the overlord. Thus, mind readers in Real Life would be complete Paranoia Fuel. This is why in settings with un-masqueraded telepaths, they are often persecuted, policed, and registered. That is, when they aren't used as weapons or killed.

Heroic telepaths are thus in a difficult position both inside and outside a story proving Bad Powers, Bad People is not true. An author wants them to be heroes, but has to somehow assuage the reader the character isn't a mental voyeur (or if he is, he's got a chivalrous side) and the character will also have to put their colleagues at ease that they aren't likely to turn into a Mind Probing Hive Queen. To solve this, they often practice what they preach with Mind Over Manners.

Telepathy comes in a lot of flavors:

In a setting where there are telepaths, expect people to use Psychic Static to protect their thoughts, and telepaths to construct a Psychic Block Defense to give each other a Poke in the Third Eye when they're snooping. Usually indicated by the Pstandard Psychic Pstance.

Examples of Telepathy include:

Retrieved from "https://allthetropes.org/w/index.php?title=Telepathy&oldid=1935116"
Categories:
Cookies help us deliver our services. By using our services, you agree to our use of cookies.