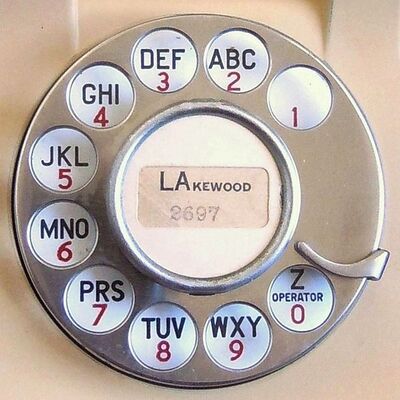 A rotary telephone dial ca. 1940 with its original number card.

A throwback to another era, telephone exchange names were commonly used in the largest cities from the Roaring Twenties until the Sixties. As an example, 736-5000 would have been written PEnnsylvania 6-5000 or PE6-5000.

Before the length of local numbers was standardised across the North American Numbering Plan, a call to a small village typically involved asking the operator for the name of the village, followed by the three or four digit local number – and the smallest places invariably had the live operators at the manual switchboards asking "Number, please?" in their stereotypical, scripted way. "Thank you."

Conversely, in a large, dense Atlanta or Toronto-sized city, one telephone central office was rarely able to cover more than a few local neighbourhoods. The copper to run wires from each subscriber's premises to the telco was expensive to deploy, so distances were kept to a minimum; there were also practical limitations on how many numbers would fit on a single switchboard. City-wide metropolitan coverage would therefore require many individual local offices in the largest communities, which would typically be named after streets or neighbourhoods in some locally-distinctive manner. A Montréal number might (before the late 1950s) have looked something like "ATwater 1234" where Atwater Avenue is a major street in that city. When the dial telephone became commonplace, this was dialed as the first two (or in some places, the first three) letters of the exchange name, followed by the digits. "ATwater 1234" would therefore be dialed as AT-1234, a six-digit call.

The longest local numbers of this era were seven dial pulls, in a handful of large communities like London or NYC. For example, Gamages store in Holborn, London UK was assigned "HOLborn 8484" (which, were it still extant, would be +44 20 7-HOL-8484) and the Hotel Pennsylvania near NYC's Penn Station was (and still is) PEN-5000 or "PEnnsylvania 6-5000" (+1-212-PE6-5000). The names were often distinctive and tied to local geography, so Chicago numbers prefixed with "WRIgley" were likely in a neighbourhood near Wrigley Field... as a general, ball park estimate. They were a local phenomenon, they were an exclusively big-city phenomenon but a few were iconic in their respective communities.

Direct-dial distance calling became commonplace in the late 1950s; all of the existing North American-style numbers were lengthened to a three-digit area code and a seven-digit local number, usually written as two letters and five numbers (2L+5N). AT&T used a stock list of neutral but largely meaningless words as exchange names for small communities, so a number like 54x-xxxx would be written as LIx-xxxx with LI claimed to stand for "LIncoln" or "LIberty". These assignments were short-lived (typically 1958-1966 as their heyday) as eventually telcos just started printing the entire number as digits. KLamath 5-5555 therefore became KL5-5555 and ultimately 555-5555 (although assignments of 55X, 57X, 95X, 97X numbers were rare or non-existent as there weren't many names which could be spelled with those leading digits; 555 in particular contains almost nothing other than the 555-1212 directory information and a few fictional numbers).

There was some ambiguity as the letters O, Q and Z either had no consistent dial placement ("O" was on the zero in France, while "MNO" is on the 6 in North America) or were simply not used. Any attempt to use the original pattern ("ring me on LIberty 5-6789") would likely only cause confusion today, as the letters on the telephone dials have been largely repurposed for other applications - such as vanity number "phonewords" where the caller dials the entire thing instead of just the first two letters (so L-I-B-E-R-T-Y as 542-3789, not 54x-xxxx). Second-generation mobile "flip phones" or "feature phones" occasionally used the letters on the dialpad for SMS texting (so 6-MNO, 7-PQRS, 9-WXYZ, requiring the user keep pressing 7777 until the "S" appears, then wait a second, then compose the next character...); that became obsolete with smart phones and touch screens. The original scheme is merely a long-forgotten historical footnote.

The old format does very much live on, however, in fiction. Often, a piece will attempt to invoke the 1950s or 1960s for nostalgia purposes, and suddenly they're calling on "KLamath 5-5555" as if it were a real telephone number – just to mimic the format which was Truth in Television in the monochrome Fifties era. These become a trope when modern works invoking the format to appear to be set in the 1950s start to become more numerous than the surviving examples from that actual era. And of course, they remain, accidental fossils, in Unintentional Period Pieces that never anticipated they'd ever disappear.

Examples of Telephone Exchange Names include: 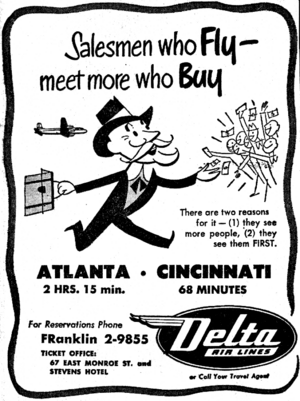 Retrieved from "https://allthetropes.org/w/index.php?title=Telephone_Exchange_Names&oldid=1876106"
Categories:
Cookies help us deliver our services. By using our services, you agree to our use of cookies.