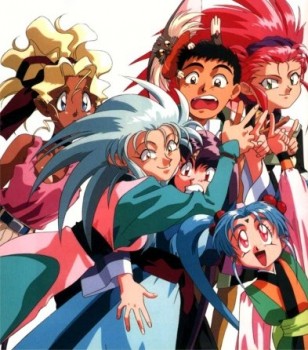 The first television series based on Tenchi Muyo!, Tenchi Universe (also known as Tenchi Muyo! TV) tells a similar story to Tenchi Muyo! Ryo-Ohki, but in a longer manner. The first half of the series, "Earth Adventure", introduces the main characters, and a short arc that explores various fantasy worlds ("Time and Space Adventures") follows. The show's second half, the "Space Adventure" arc, follows Tenchi and the gang as they travel to Jurai to attempt to stop a coup. This show is its own specific continuity; although it shares almost all of the chief characters from the OVA, many aspects of the story and characterization are changed from the OVA.

Tropes used in Tenchi Universe that are not on the Tenchi Muyo! page (or are averted/subverted) include:
Retrieved from "https://allthetropes.org/w/index.php?title=Tenchi_Universe&oldid=1839198"
Categories:
Cookies help us deliver our services. By using our services, you agree to our use of cookies.