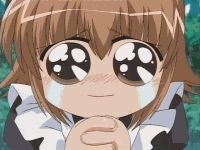 Sometimes tears are not a sign of weakness. Even when they flow easily and often...

Opposite Manly Tears are Tender Tears, where the character weeps more than most people because of the exquisite tenderness of her heart. More frequent for women than for men.

Also opposed to Water Works where the character cries because he is weak. Tender Tears result from someone else's misfortune. If they feel any guilt over the situation—reasonably or unreasonably -- Tears of Remorse will also occur.

Seldom a Single Tear, but it's possible.

A favorite trope of the Romantic movement, who regarded it as a mark of exquisite sensibility. Scorning them—such as characterizing them as Water Works—is a mark of a callous and hard-hearted soul; even those who do not cry themselves can appreciate Tender Tears. Indeed, the tender character may explain the cause of the tears with such poignancy as to inspire Manly Tears in less tender characters.

Super-Trope of He Will Not Cry, So I Cry for Him and Tears of Joy.

Examples of Tender Tears include:

Retrieved from "https://allthetropes.org/w/index.php?title=Tender_Tears&oldid=1691726"
Categories:
Cookies help us deliver our services. By using our services, you agree to our use of cookies.