Everything About Fiction You Never Wanted to Know.
(Redirected from Tenjou Tenge)
Jump to navigation Jump to search 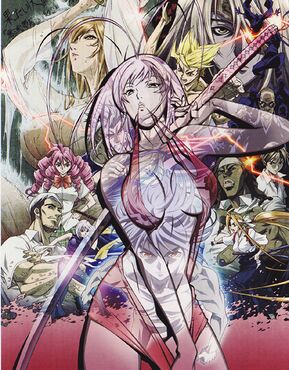 Not even half of all the characters...

Tenjho Tenge (1998-2010) is a manga series created by Oh! Great, about the struggle between two groups of powerful martial artists in a high school setting, continuing a battle that has been unresolved for centuries.

In the first volume, Souichiro Nagi and his friend Bob Makihara arrive for their first day at Todo Academy, intending to rule the school with their superior martial arts skills. They are quickly disabused of this ambition when it turns out the school is filled with other superhuman martial artists. The Executive Council wants to stifle any independent martial artists, and through a series of odd events, Souichiro and Bob wind up joining the only viable opposition, the Juken Club.

As this battle heats up, the manga suddenly flashes back to the events of a few years before, for a lengthy explanation of how the situation had deteriorated to the point it was at the beginning of the manga, and several characters' hidden motivations. Eventually, it returns to the present, where the action is interspersed with more Flash Backs and Backstory.

The manga is known for its Fan Service and violence; the former was toned down a bit for the anime release.

The United States release, by the CMX imprint, was made somewhat notorious by some rather severe editing to make the book suitable for a "T" rating, rather than the "M" it would normally have received.

Since the CMX imprint has ceased publication, Tenjho Tenge has had a license rescue and is now put out in North America by the Viz Signature line, with considerably less editing of naughty bits.

Tropes used in Tenjho Tenge include:
Retrieved from "https://allthetropes.org/w/index.php?title=Tenjho_Tenge&oldid=1893465"
Categories:
Cookies help us deliver our services. By using our services, you agree to our use of cookies.