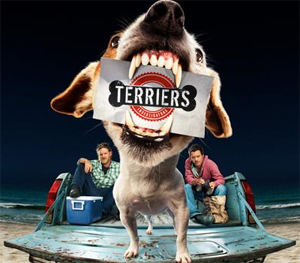 As a rule, I don't like getting my ass kicked for free.
—Hank Dolworth

Terriers is a Detective Dramedy, created by Ted Griffin and co-executive produced by Shawn Ryan, that premiered on FX in the fall of 2010. Critics have made favourable comparisons to The Big Lebowski and Brick.

Hank Dolworth (Donal Logue) is an ex-cop and a recovering alcoholic who makes his living as an unlicensed Private Detective in Ocean Beach, California, along with his partner Britt Pollack (Michael Raymond-James), a reformed thief. They typically get jobs from their lawyer Maggie, some reluctant police help from Hank's former partner, Detective Mark Gustafson, and usually part of the mix each episode is Hank's ex-wife Gretchin and her new fiance Jason, and Britt's girlfriend Katie. Life is cruisey, until the duo agree to take on a job from real estate developer Robert Lindus that involves tracking down Eleanor Gosney, the daughter of Hank's old buddy Mickey. Cue a murder, a scandal, and the beginnings of the biggest and most dangerous case Hank and Britt have ever had to deal with.

The show only lasted one season.

Tropes used in Terriers include:

Hank: What, did you think the car was going to explode?

Britt: Will you visit me in prison?
Hank: For conjugal visits, yeah.

Hank: You know what this reminds me of? The time we had to climb down the ravine to the car we crashed with the dead guy inside.