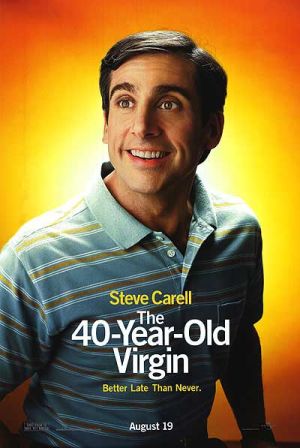 The 40-Year-Old-Virgin is a 2005 comedy film starring Steve Carell, and the first film to put director Judd Apatow on the map (after television stints with Freaks and Geeks and Undeclared). It is the story of Andy Stitzer, a 40-year-old man who, due to a series of unfortunate mishaps all throughout his youth, never experienced sexual intercourse during his formative years and has lost interest in his adulthood. One night, while playing cards with his friends from the electronics store where they all work, Andy inadvertently reveals that he's a virgin; this initially results in the expected chummy jeers, but shortly thereafter his friends, Cal, Jay, and David, decide to help him lose his virginity. Eventually, Andy meets a nice woman named Trish with whom he shares a genuine emotional connection, and though he's nervous about telling her the truth about his virginity and the subject of sex in general, he must learn to overcome his insecurities to discover both sex and romance.

Since we all know that there are no male virgins and that loners are freaks, this movie surprised many by portraying the title character, a virginal and nerdy (he collects action figures and comics) introvert, not as some kind of loser or freak but as a likeable fellow who's simply chosen not to have sex after a short series of rejections in his youth. Since it dresses in the skin of a Sex Comedy, it's also refreshing to see the subject of sex summed up as "a nice thing to have, but meaningless without love," as seen in Andy's well-meaning but dim-witted friends, who all lead active sex lives but are probably less happy than Andy because their romantic relationships are unfulfilling.

In fact, it's been observed by some female reviewers that Andy should be the one with the active sex life, not in spite of his personal habits, but because of them. For instance, while his friends are observed to be whiny losers, Andy is a handsome man who prefers an "unmanly" bicycle to get around, but it helps keep him in great shape on top of his regular exercise regime, giving a handsome exterior complementing his winning interior.

Tropes used in The 40-Year-Old Virgin include:

Trish: Oh my god! Andy! Are you okay?!
Andy: There were two sides to that billboard, and they both hurt equally!