The 90s Are All That 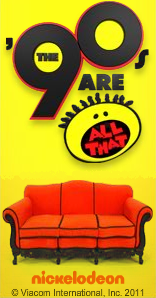 Nostalgia can be a powerful thing. For almost as long as online social networking has been a thing, online petitions have been thrown up in order to convince Nickelodeon — considered by many a fan to have been in its death throes since 2008 — to resurrect its old shows in reruns.

As you could tell by this page, it worked in a way no one expected — Nick dusted off the Big Orange Couch, gave Kenan Thompson a seat on it, and created the two-hour block The '90s Are All That, which airs on Teen Nick from Midnight to 2:00 AM Eastern. The show's website [dead link] is very active, encouraging viewers to log in to it via Facebook or Twitter, has noted and embraced the resulting memes (#ThingsClarissaDidntExplain is a common hashtag), and frequently polls on favorite shows and related topics.

In October 2011, the block resurrected Stick Stickly of "Nick in the Afternoon" fame as part of "U-Pick with Stick", a Friday-night feature with online voting for what shows would be aired that night.

Did we mention that the block is giving Teen Nick its highest late-night ratings ever, and outperformed Leno, Letterman, Fallon, Lopez, and Kimmel in two demographics on its first night along with outperforming Conan in a third? It's true!

Programs include (all times Eastern):

These programs are then rerun immediately afterwards--the same episodes, in the same order.

The following shows have aired on U-Pick special event nights and/or had episodes posted on the block's website but are expected to join the lineup at some point:

Tropes used in The 90s Are All That include:
Retrieved from "https://allthetropes.org/w/index.php?title=The_90s_Are_All_That&oldid=1768181"
Categories: