The Adventures of Ford Fairlane 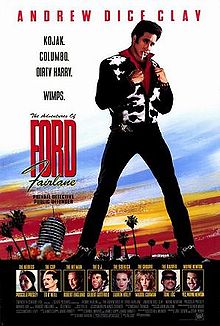 The Adventures of Ford Fairlane is a 1990 film and star vehicle for 80's comedian Andrew Dice Clay, who plays the eponymous Ford Fairlane. It's also notable for being an early work of Finnish director Renny Harlin and being featured in the music video for Billy Idol's "Cradle of Love." It was not well received, tying for the Golden Raspberry Award with Ghosts Can't Do It the year of its release; Roger Ebert called it "loud, ugly and mean-spirited." Naturally, it didn't do well in the box office, although Clay has claimed this was the result of protesters getting it pulled from theaters after only one week.

Ford Fairlane is a private investigator who specializes in the Hollywood music industry. His business, run by himself and his assistant, Jazz (Lauren Holly), is experiencing financial difficulties because most of his clients keep paying him with expensive gifts instead of money. Eventually, he's hired by two seemingly unrelated clients, shock-jock DJ Johnny Crunch (Gilbert Gottfried) and humorless socialite Colleen Sutton (Priscilla Presley), to find a young groupie named Zuzu Petals. Although he has reservations, they offer him cash. His investigations lead him through a cast of colorful characters, including sleazy record producer Julian Grendel (Wayne Newton), a giggling mercenary known only as "Smiley" (Robert Englund), the bumbling, nostalgic cop Lieutenant Amos (Ed O'Neill), and space cadet Zuzu Petals (Maddie Corman).

According to director Renny Harlin on his DVD Commentary, the script was originally written as a very standard detective story. When Andrew Dice Clay was cast in the lead, changes were made to incorporate several of Clay's stand-up routines. This decision was probably an effort to boost box office numbers, as much of the audience probably consisted of people who were established fans of Clay. On the other hand, although Andrew Dice Clay was originally noticed for his celebrity impressions, his real fame came from his over-the-top vulgarity, audacious sexism, politically incorrect humor, and the inevitable controversy it created. This led to a lot of backlash against his work, especially from women's rights advocates. Among other things, he was banned from MTV, and his appearance on Saturday Night Live, originally aired during a later time slot than usual, was boycotted by cast member Nora Dunn. By the time this movie was released, Andrew Dice Clay's comedy career was pretty much over. Ford Fairlane may or may not have been a last-ditch effort to revitalize his popularity, but it (and its failure) ultimately served as the final nail in the coffin.

Tropes used in The Adventures of Ford Fairlane include:
Retrieved from "https://allthetropes.org/w/index.php?title=The_Adventures_of_Ford_Fairlane&oldid=1479860"
Categories: