The Adventures of Pete and Pete/Recap/S2/E12 Yellow Fever

Everything About Fiction You Never Wanted to Know.
< The Adventures of Pete and Pete‎ | Recap‎ | S2
Jump to navigation Jump to search 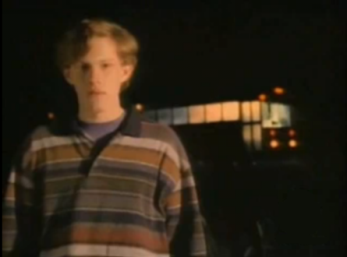 And with those words begins "Yellow Fever", an episode filled with betrayal, misunderstanding, manipulation, love lost, and ear flicking.

Our journey begins with a briefing from Ms. Jerpoozy, who goes on at length about field trip rules as our protagonists are about to embark on a trip to the Gulch County Milk Museum. The number one rule is that no one is allowed to sing "If You're Happy and You Know It", as it's disturbing to their bus driver, Stu Benedict. It had been his favorite song, shared with him by fellow driver Sally Knorp, who--of course--has dumped him. Again. Over NOTHING! Okay, sure, he's fairly calm this time around, but he's nearing his breaking point.

Meanwhile, someone's left Ellen a love letter from someone promising to reveal themselves by sitting next to her on the way over, and it's bugging Big Pete for some reason even he can't put his finger on. Big Pete, in spite of his better instincts, suddenly becomes a Jerkass with regards to Ellen's secret admirer, taking the seat next to her and teasing her over the letter.

And then there's Mark Twib, the local bully magnet, with his insanely flickable ears. And Wendall Hyde, who wants to sing for special events. Della Sum, meanwhile, has bus-ride-induced bladder issues, Teddy is determined not to finish his lunch during the ride, and Bill develops an instinct for practical joking--he hangs a sign on the window of the bus reading "Help! Being kidnapped! Call police!" Guess how long it takes for the bus to get pulled over.

Bus Driver Stu's story checks out, but to make sure he's fit to drive the cops put Stu through all sorts of coordination tests. As Big Pete congratulates Bill on a successful prank, Ellen calls Pete on being an asshole, even saying she wouldn't be surprised if he started picking on Mark Twib next.

Stu passes his tests and reboards the bus in a particularly foul mood, sending Big Pete to the back of the bus for arguing. He is greeted with open arms by Endless Mike, as to Pete's shock Bill takes the seat next to Ellen. Tensions begin to run high, as Della's blatter has set the bus two hours behind schedule, and to top it off Bus Driver Stu is horribly lost--he even passes by street signs entirely in Spanish and Korean. As he stops to ask a farmer for directions, only to find out that he's made of straw, Ellen finds out that Bill has absolutely no knowledge of the love letter and only sat with Ellen for the hell of it. Big Pete doesn't know this, of course, and with a little convincing from Endless Mike he decides to get revenge on Bill for stabbing him in the back. Pete puts some mentholated warm lather (undetectable to human touch, painful when exposed to a popped zit) on Bill's hand and then gets Bill to touch his face, sending him into a world of pain. Mike, Pete and their crew celebrate by pouring four whole bottles of soda pop down the aisles of the bus, causing all their classmates to have to get out and pee.

Ellen and Big Pete get into a big fight, and Endless Mike congratulates him on taking down Bill, asking him what he has in mind to piss off Ellen. Pete remembers Ellen's earlier suggestion that he'd turned into the sort of creep who'd flick Mark Twib's ears, and does that. Twib turns around and is confused to see Pete is the one who did it, and Ellen declares that she's never talking to him again.

Once back on the bus, Twib decides to exact his revenge upon his classmates, by singing "If Your Happy and You Know It". Stu seems fine, though, as he starts happily singing along...and then dancing through the aisles. With the bus moving. Towards a cliff face. Only one man can save them now!

Unfortunately, Wendall Hyde's Chekhov's Skill is ultimately useless, as trying to change the song does absolutely nothing. Stu just keeps dancing to "If Your Happy". It's only the cry of "NO ONE'S DRIVING THE BUS!" that finally makes Stu's senses--or something approximating them--return to him, and he hits the breaks just in time to save them all.

They finally show up to the Milk Museum, which looks suspiciously like a farm, as an outraged Ms. Jerpoozy demands to know who sang that song, and says the culprit will receive an F on the project and four weeks detention. (How she knows it was sung is never explained.) Big Pete takes the hit, feeling horribly guilty, and is told to sit on the bus for the entirety of the trip. Endless Mike kicks him out of his gang. When Pete apologizes to Mark, Mark reveals that he sent the love letter, and decides to let Pete and Ellen figure out where they stand before trying again. Pete apologizes to Bill, who accepts, but not before slapping a kick-me sign on Pete's back. Ellen and Pete make up as well, and she decides to sit on the bus with him while the rest of the class tours the museum.

This is "Yellow Fever". And this is it's trope list.