The Adventures of Shirley Holmes 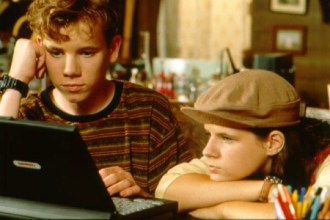 A Canadian kids' show from The Nineties about Shirley, the great-grandniece of the legendary Sherlock Holmes, who solves crimes in the fictional town of Redington, where she lives with her father Robert, a British diplomat, and her grandmother Peggy.

Shirley's Dr. Watson is Bo Sawchuck, a street-smart former gang-member whom Shirley meets in detention; she helps get out of trouble and they become best friends and sleuthing partners. Likewise, her Moriarty counterpart is Molly Hardy, a scheming, sociopathic mastermind of a teenage girl that is admired by everybody who doesn't know her true nature.

The show aired for four seasons in YTV. It was well received by both the audience and the critics, winning several awards during its run. It aired in over 80 countries, and was dubbed in eight languages. There was buzz of a movie possibly being made, but it never materialized. As of now, there hasn't been an official DVD release.

Tropes used in The Adventures of Shirley Holmes include:
Retrieved from "https://allthetropes.org/w/index.php?title=The_Adventures_of_Shirley_Holmes&oldid=1523733"
Categories:
Cookies help us deliver our services. By using our services, you agree to our use of cookies.