The Amazing World of Gumball/Radar

Everything About Fiction You Never Wanted to Know.
< The Amazing World of Gumball
Jump to navigation Jump to search 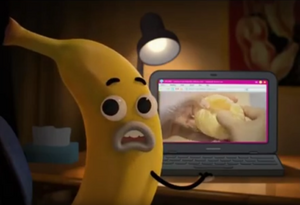 Darwin: Three best friends? Won't that be a bit... weird?
Gumball: It's only weird if we make it weird. Do you find it weird?
Darwin: Not if you don't.

Gumball: (while doing high dive to save Darwin from a girlfriend) On one hand, I create a diversion and save Darwin. On the other hand, I splash Penny and look like- *SMACK*

Darwin: Does this mean we can call you Gaylord instead of Mr. Robinson?

Gumball: Man, What a pile of beans.
Darwin: Dude, watch your language, you'll get us in trouble.
Gumball: Well I'm sorry Darwin but it is. It's a big, steaming, pile of beans.

Darwin: I don't want to be a baby father!