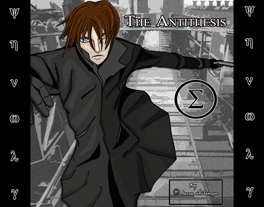 The Antithesis is a novel series published by 1889 Labs, Ltd., but began as a speculative, Low Fantasy Web Serial Novel that debuted in February of 2010. It is currently on-going, and has completed two books in the saga: Renovatio and Secundum Velum. The story is currently on Decus, the 2nd Arc and it's already proving to be a much darker and violent entry to The Antithesis saga.

The story revolves around the conflicts of a uniquely-perceived Heaven and Hell, narrated by the main character, Alezair Czynri, who is a member of the "Jury", a sect of non-Celestials who live in Purgatory and enforce "The Code". The Antithesis sets itself apart from other stories regarding angels and demons due to the nature in which both races are characterized. Instead of basing it off of previous fantasy and/or religious preconceptions, the author, Terra Whiteman, tries to explain the existence of Heaven and Hell through science.

The Angels, a species classified as Archaeans are ruled by Commander Yahweh Telei, who is surprisingly an adolescent prodigy and genetic engineer, suffering from cognitive disorders closely resembling O.C.D. and Aspergers Syndrome. His two Seraph generals, Seyestin and Cereli are both fraternal twins and incestuous with one another. Further military and political figures in Heaven (their capital city, Crylle) comprise the 'Argent Court'.

The Demons, a race known as The Fallen, were at one point angels, but how they became demons has yet to be revealed. Hell exists in seven layers, which are islands suspended above the Atrium's gaseous surface (where Heaven is located in the highest layers). It is described as a cold, desolate tundra, and The Fallen were forced to migrate to the lower regions due to a Civil War in Heaven from a revolt over slavery and other social abuses three hundred years prior to the beginning time line of the The Antithesis saga. The Obsidian Court (Hell's Parliament)is ruled by Lucifer, and his two general Archdemons Samael and Caym. Currently, other major Fallen characters involve:

The Jury resides in Purgatory (a place between both Heaven and Hell in The Atrium, often deemed as neutral ground for both species since normally demons cannot enter Heaven, and vice versa) and fulfill the role of mediators between The Argent and Obsidian Courts. Their job duties include the delegation and between both Courts, the legislation of new laws in the Code of Apsularis, and also the pursuit and execution of angels or demons who fail to abide the Code. The Jury consists of a powerful species known as The Vel'Haru, which are originally non-natives to The Atrium, and were hired by Lucifer and Yahweh during the formation of the Obsidian and Argent Courts. The Vel'Haru are described as humanoid in appearance, but are also highly intelligent and predatory in nature. It is said they originated from a universe called Exo'daius, though where and what this is has yet to be revealed. The Jury consists of four Vel'Haru, a noble and her guardians:

The Contest at first appears to actually be an experiment in progress between Yahweh and Lucifer, trying to determine which raison d'etre (the Fallen or Archaean) is more successful for survival, though as the story progresses it is implied that this contest is only a decoy in attempts to dissuade any further wars between Heaven and Hell. It is also implied in Secundum Velum that Yahweh and Lucifer are not actually enemies, but allies with mutual objectives: peace between both races.

Arc II: Decus begins with main character Qaira Eltruan, a Nehelian leader struggling to keep the Archaeans out of The Atrium. It instantly becomes known that the Archaeans are not true natives to The Atrium, but occupied it at an earlier time from the Nehel. Decus takes place approximately 900 years before Book 1: Renovatio began. In its earliest stages, readers are introduced to Qaira Eltruan, a hero to his kind, but a rather troubled man in mentality. He battles drug addiction and appears to have severe and distorted perceptions of morality. Readers are currently trying to decide whether they like him or not.

The Antithesis utilizes many modern human themes, philosophies and conflicts:

Tropes used in The Antithesis include:
Retrieved from "https://allthetropes.org/w/index.php?title=The_Antithesis&oldid=1643391"
Categories: