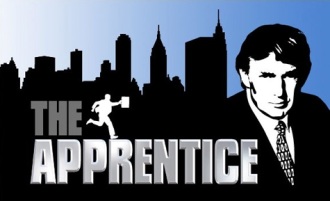 A group of contestants compete in business-related tasks to become "apprentice" to real estate mogul Donald Trump. At the end of each task, one (or occasionally more) contestant is "fired" by the man himself. The last contestant standing is "hired" and given a job in the Trump organization.

The show's first season was a ratings sensation, but ensuing seasons have never matched that success. To date, seven seasons of the standard show have aired, as well as three celebrity seasons (in which the prize was money for charity,) and an unsuccessful Spin-Off starring Martha Stewart.

A Trans-Atlantic Equivalent started on The BBC in 2005, starring Lord Alan Sugar of Clapton, originally just called Sir Alan. Lord Sugar is probably best known for bringing high-quality, low-cost consumer electronics into British homes. After doing the predictable billionaire thing of pissing his money away by buying a football club (Tottenham Hotspur FC), he eked out a living making Sky TV decoder boxes, and even sold that to Sky a couple of years ago to concentrate on property (didn't that turn out well?). Compare this to The Donald, who owns half of New York. Despite this however, the UK version had a reversal of fortunes compared to the US original, starting out as a little-watched niche show and gradually evolving into one of the BBC's most popular shows by around the time of its fourth series.

It's now widely accepted to be mostly watched by people who A) like to laugh at stupid people humiliating themselves and B) don't want to admit to watching Big Brother in public. So, high viewing figures and armchair punditry all round, then.

An Irish version, starring car magnate and writer Bill Cullen, started in 2008. There are also many other international versions.

Junior Apprentice, a shorter series with ten candidates aged 16 and 17 competing for a financial prize rather than a job, aired in the UK between series 5 and 6. It proved a success and aired again after series 7, albeit renamed to Young Apprentice.

Tropes used in The Apprentice (TV series) include:

The UK version contains examples of:

She is ruthless. She'll walk over and tread over anybody. She'll eat them up and spit them out for her breakfast. That's what I like about her, really.

"I could not have put more effort into yesterday. I fragged myself to the bone yesterday to try and make this thing work. Your reasons for bringing me in here just do not stack up. One, on a personal level, and two, on a business level. Sir Alan said he does not know about my personal stuff. He knows about it because you talked about it, because Kristina talked about it. Fine, been that, but if you want to go personal, I'll go personal. I very much strongly advise you not to take down the personal route. At a business level, you have one speed setting, and that speed setting is slow, slow, slow! Someone put the wrong speed dial in when they created you, sweetie, which is why when the phone rings, I always drop. Because I know that phone call will take forever to hear something either I know, or I can get done quicker myself. So you know what? You're just barking up the wrong tree!"

"You are representing businesswomen today, one of which I am. And I have to say, it is outrageous the way you're behaving. 75% of my management team are women, and I've never come across anything like this. And I think you have to remember who you're representing in this process. Young women out there who want to have an opportunity to do this - you should be an example to them."

"Well, first of all, everything was wrong. The volume was wrong, the margins were wrong, the techniques of selling were wrong. I struggle to find anything that you did right, really. But it wasn't just you -- I think it was everybody in the team who just failed to perform."

Margaret: Good morning.
Stuart Baggs "The Brand": (elated) Margaret! (offers hand) Nice to meet you. Stuart.
Margaret: Nice to meet you, but would you normally address an interviewer in this position by their first name when you haven't met?
Baggs: Perhaps not, I just feel like I know you, because I've seen you before.
Margaret: Yes, but, erm... you don't.
Baggs: (looks deflated) Miss Mountford.
Margaret: That's better, thank you.

The Irish version contains examples of: