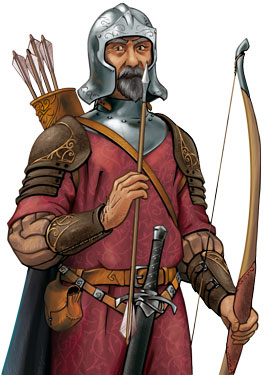 The Archer is watching you...

Archers are often characterized as calm, self-possessed, and analytical. Since they are removed from the raging melee of close combat, they must keep their focus and not let adrenaline upset their aim. In High Fantasy, elves usually share these traits, and are nearly always depicted as excellent archers.

Due to the amount of concentration and practice needed, archers usually receive a fair amount of respect for their skills. In modern settings, an archer is often a part of an ancient and noble warrior tradition, forsaking the newfangled vulgarity of firearms.

If part of a fighting team, the archer is usually less physically strong and robust than their teammates because of the erroneous perception that archery relies more on grace than the brute strength required to hack and slash. In reality, the draw of most warbows can range from 60 to 150 lbs, requiring significant strength throughout the body (especially the upper body) to use effectively. This misconception often leads to The Chick getting stuck with a bow as a slightly more proactive take on the White Magician Girl. This also has the benefit of keeping the delicate female safely out of the bone-crunching melee.[1]

It is interesting how many traits of the archer have been transferred to the Cold Sniper in modern settings.

Loveable Rogue-type archers will usually have "Robin Hood" themed outfits, something like this. One of the themes recurring across several mythologies is the proper archer passing the challenge with a strong bow, while the uninitiated can't even string the weapon. To understand why this is prohibitive, remember that the strongest bows are recurved ones and see the first photo here—if a man who did it all his life needs an assistant to do these gymnastics right, what are the chances of anyone unskilled, alone, against an exceptionally strong shaft when it's slightly dried and twisted?

And for the record, one does not "fire" a bow unless it's a sci-fi version that shoots energy bolts. One "looses," "shoots," or "lets fly."

Contrast the hilarious randomness of the Trick Arrow. If The Archer has Improbable Aiming Skills, he may also be able to do a Multishot. For added irony, check out No Arc in Archery. See also Annoying Arrows. Sometimes overlaps with the Forest Ranger.

Nor to be confused with Captain Jonathan Archer, Cate Archer, Sean Archer, Archer, Sterling Archer, The Archers, or Servant Archer.

Examples of The Archer include:

Retrieved from "https://allthetropes.org/w/index.php?title=The_Archer&oldid=1922415"
Categories:
Cookies help us deliver our services. By using our services, you agree to our use of cookies.