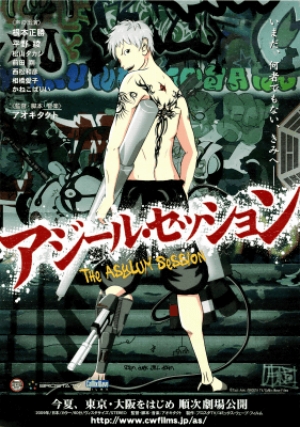 The Asylum Session is a 2009 feature film by Takuto Aoki. Set in near future, it tells the story of a high-school girl Hiyoko, voiced by Aya Hirano. She wants to be a painer like her deceased mother, but her father disapproves. She runs from home, ending up in the Asylum, an abandoned stadium occupied by a commune of misfits. One of them is especially weird: Akira, a tattooed white-heared rebellious boy with a prosthetic leg who can somehow fly. Unfortunately, the Asylum is about to be demolished. The inhabitants stand up to protect their place. Apart from fighting the police, they decide to protect the Asylum by holding an underground rock fest.

Tropes used in The Asylum Session include:
Retrieved from "https://allthetropes.org/w/index.php?title=The_Asylum_Session&oldid=1833234"
Categories: