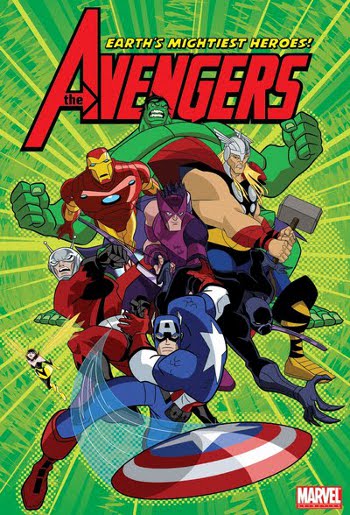 The Avengers: Earth's Mightiest Heroes is a show on Disney XD, based on the Marvel comics series The Avengers.

The series begins with a mysterious, massive breakout at each of the world's four super-villain prisons, releasing a horde of super-powered criminals upon the world. Brought together by the massive threat posed by the escaped Graviton, the team known as the Avengers are born - they are the Earth's Mightiest Heroes!

Originally, the team consists of The Incredible Hulk, Iron Man, Ant-Man, The Wasp, and the The Mighty Thor, with Captain America (comics), Hawkeye, the Black Panther, and a host of other heroes ready to join them. Together, they deal with such threats as the terrorist organization HYDRA, the mystical trickster god Loki, and many many more.

The series premiered on October 20th, 2010. Prior to this, Disney XD premiered a series of micro-episodes to introduce us to the series, which can be seen here. Combined with the actual series, they all add up to two seasons with twenty-six episodes each. Two series of tie-in comics also exist: a four-issue miniseries, and a set of additional comics published under the "all-ages" Marvel Universe banner.

This is the second attempt at The Avengers having an animated series, The Avengers: United They Stand being the first. This one has been much better received. 2013 will apparently see Earth's Mightiest Heroes replaced with an episodic show, with a format differing the serialized format of this series.

The series has a character sheet. For tropes related to a single character, please go there.

Not to be confused with the mid-2000s comic series The Avengers: Earth's Mightiest Heroes.

Tropes associated with both the micro-episodes and TV series:

Retrieved from "https://allthetropes.org/w/index.php?title=The_Avengers:_Earth%27s_Mightiest_Heroes&oldid=1912153"
Categories:
Cookies help us deliver our services. By using our services, you agree to our use of cookies.