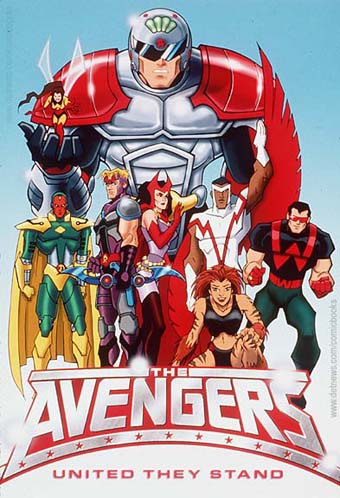 The Avengers: United They Stand was an Animated Series from The Nineties starring Marvel Comics' superhero team, The Avengers. Unfortunately, due to plans for live action movies, Captain America (comics), Iron Man and Thor couldn't be used as full members; Thor only appeared in the opening credits, and Cap and Iron Man made single-episode guest appearances. Leaving Ant-Man as the the leader of the Avengers. The rest of the roster included The Wasp, The Vision, Scarlet Witch, The Falcon, Hawkeye, Tigra, and Wonder Man.

Marvel briefly published a comic book tie-in. Written by Ty Templeton, he managed to make the best of the odd character designs and even managed to tell some accessible, fun, classic Avengers stories. He even managed to perfectly update Even an Android Can Cry -and- work in a guest appearance by Devil Dinosaur and Moon Boy.

This series began airing in 1999 but was canceled after 13 episodes.

Tropes used in The Avengers: United They Stand include:
Retrieved from "https://allthetropes.org/w/index.php?title=The_Avengers:_United_They_Stand&oldid=1912148"
Categories:
Cookies help us deliver our services. By using our services, you agree to our use of cookies.