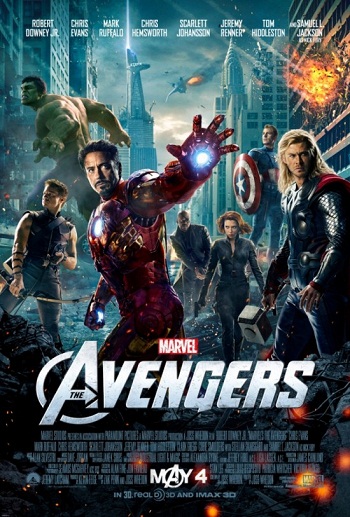 "There was an idea. To bring together a group of remarkable people. So when we needed them, they could fight the battles that we never could."
—Nick Fury

A Live Action Adaptation of The Avengers comic book directed by Joss Whedon, with a cast composed of:

Part of the Marvel Cinematic Universe, followed by Avengers: Age of Ultron and Avengers: Infinity War. The story revolves around the heroes of the first Marvel Studios films (Iron Man, Thor, The Incredible Hulk, and Captain America the First Avenger) banding together to form the eponymous super team.

Steve "Captain America" Rogers, found frozen alive and unthawed in the modern day, must come to terms with the loss of his past life while trying to cope with the modern world. Meanwhile, Loki (the Big Bad of Thor) manages to make his way to Earth in pursuit of the Tesseract, and an entire army follows him.

SHIELD director Nick Fury recruits Rogers to join The Avengers alongside Tony "Iron Man" Stark, Thor, Bruce Banner (and The Hulk), Black Widow, and Hawkeye to face the threat of Loki's invasion. With conflicting personalities and motivations such as Thor wishing to protect his brother while stopping the invasion, the team must set their differences aside and work together if they hope to save the world.

The Avengers should not be confused with the 1998 film adaptation of the classic British TV series (found at The Avengers (1998 film)). The movie is called Avengers Assemble in the UK to ensure this confusion doesn't happen (and also the Republic of Ireland, just because). In addition, the official full title in the US is Marvel's The Avengers.

An eight-issue Prequel comic, The Avengers Prelude: Fury's Big Week has also been released digitally, tying up loose ends from all movies and setting the stage for The Avengers.

The Avengers assembles the following tropes together:

Fury: "[Thor] forced our hand. We had to come up with something to--"
Stark: "A nuclear deterrent. Because that always calms everything right down."
Fury: "Remind me again how you made your fortune, Stark?"

Tony: There's no throne, there is no version of this where you come out on top. Maybe your army comes, and maybe it's too much for us, but it's all on you... Because if we can't protect the Earth, you can be damn well sure we'll avenge it.

Black Widow: Cognitive recalibration. I hit you really hard on the head.

Nick Fury: Is the sun coming up? (helmsman gives Blunt Yes) Then put it on the left!

Iron Man: I need you to check that panel and tell me which breakers are in overload position. How's it look?
Captain America: ...It appears to run on some kind of electricity.
Iron Man: Well, you're not wrong...

Tony: I'm bringing the party to you.
(Tony appears, chased by a Leviathan)
Natasha: I... I don't see how that's a party.

(fighting techno-organic alien invaders)
Black Widow: It's like Budapest all over again.
Hawkeye: You and I remember Budapest very differently.

Loki: Are you ever not going to fall for that?

Old Man: I will not bow to a man like you.
Loki: Ha! There are no men like me!
Old Man: There are always men like you.

Tony Stark: Please tell me nobody kissed me.

Loki: How desperate are you, that you call upon such lost creatures to defend you?

"Your heroes are scattered, your floating fortress falls from the sky. Where is my disadvantage?"

Thor: You want me to put the hammer down?!

Banner: We're not a team, we're a time bomb!

Thor: You think yourself above them?
Loki: Well, yes.

"You think you know pain? He will make you long for something as sweet as pain."

Loki: Are you ever not going to fall for that?

Thor: Loki is a prisoner.
Nick Fury: Then why do I feel like he's the only person on this boat who wants to be here?

Janitor: You an alien, son?
Bruce: A what?
Janitor: An alien. From outer space.
Bruce: No.
Janitor: Well then, son, you have a condition.

Black Widow: They're basically gods.
Captain America: There's only one God, ma'am, and I'm pretty sure He doesn't dress like that.

Tony Stark: Yeah, I realize you're a little behind the times being a Capsicle for so long.

Thor: Take care how you speak! Loki is beyond reason, but he is of Asgard, and he's my brother.
Natasha Romanoff: He killed eighty people in two days.
Thor: (hesitantly) ...He's adopted.

Bruce Banner: I don't think we should be focusing on Loki. That guy's brain is a bag full of cats. You can smell crazy on him.
Thor: Take care how you speak. Loki is beyond reason, but he is of Asgard, and he is my brother.
Black Widow: He killed eighty people in two days.
Thor: (hesitantly) ...He's adopted.

Stark: What just happened? Please tell me nobody kissed me.

Captain America: Aren't the stars and stripes a little...old-fashioned?
Agent Coulson: With everything that's happening, people might just need a little old-fashioned.

Black Widow: This is just like Budapest all over again.
Hawkeye: You and I remember Budapest very differently.

Tony: He's a full-tilt diva! He wants flowers, he wants parades, he wants a monument in the skies with his name plastered-
(realizes he's describing Stark Tower)
Tony: Son-of-a-bitch.

Nick Fury: I recognise that the Council has made a decision, but given that it's a stupid-ass decision I'm inclined to ignore it!

Joss: The Avengers is a terrible idea for a superhero team. They really don't belong in the same movie, let alone in the same room.

Agent Coulson You're going to lose. You lack conviction.

Steve: Big man in a suit of armor. Take that away, what are you?
Tony: A genius billionaire playboy philanthropist.
Steve: I know guys with none of that worth ten of you.

Tony: Everything special about you came out of a bottle.

Fury: I recognize that the Council has made a decision, but given that it's a stupid-ass decision, I've elected to ignore it.

Cap: What's the matter? You scared of lightning?
Loki: I'm not overly fond of what follows...

Steve: Doctor Banner? ... Now might be a really good time for you to get angry.
Banner: That's my secret, Captain. I'm always angry.

Tony: There's no throne, there is no version of this where you come out on top. Maybe your army comes and maybe it's too much for us but it's all on you. Because if we can't protect the Earth, you can be damned well sure we'll avenge it.

Thor: You have no idea what you're dealing with.
Tony: Uh... Shakespeare in the park? (makes Shakespeare pose) "Doth mother know you weareth her drapes?"

Widow: I thought Sitwell was on Banner?
Fury: He was, but I had to send him to New Mexico.
Widow: Why?
Fury: BECAUSE I GOT A GODDAMN ALIEN OBJECT IN NEW MEXICO, THAT'S WHY!

Fury: Hell, I dunno. Get creative, cook the books. Whatever it takes to let us do this job right.