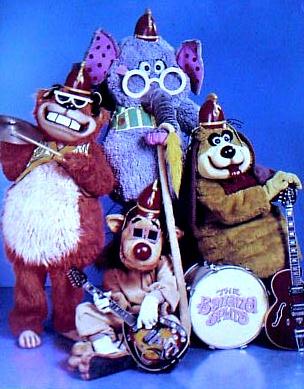 The foursome did comedy sketches, performed songs and introduced the following action segments:

After the Banana Splits became popular, Hanna-Barbera tried to duplicate its success in 1977: Skatebirds on CBS. (Some sources had 1969's The Cattanooga Cats on ABC as live/animated with the Cats live costumes, but it was all animated.) When The Banana Splits was shown in broadcast syndication, and later on TBS, the following series were added to the package:

Interesting trivia: The Banana Splits title song (or rather, a high-speed cover version by The Dickies) puts in an appearance as Hit Girl's theme music in Kick-Ass.

Tropes used in The Banana Splits Adventure Hour include:
Retrieved from "https://allthetropes.org/w/index.php?title=The_Banana_Splits_Adventure_Hour&oldid=1928267"
Categories:
Cookies help us deliver our services. By using our services, you agree to our use of cookies.