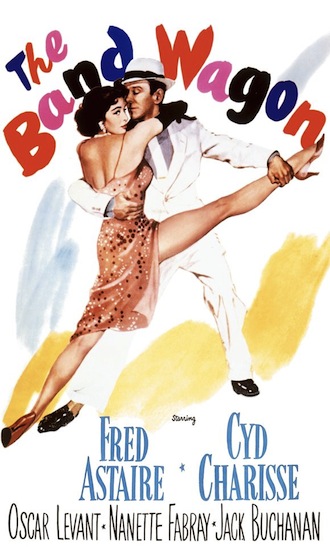 The Band Wagon (1953) is a Metro Goldwyn Mayer film based on the Broadway revue from 1931, which also starred Fred Astaire. Astaire plays Tony Hunter, a nearly washed-up hoofer who hopes to revitalize his career by doing a new Broadway musical. The going soon gets rough. The director, Jeffrey Cordova, has megalomaniacal ambitions to stage a show based on Goethe's Faust; the choreographer, Paul Byrd, is a ballet snob; and Gabrielle Gerard, Paul's girlfriend, barely condescends to dance with Tony. After everything goes to hell--so to speak--Tony and Jeffrey manage to salvage the show by turning it into a series of spectacular, and apparently unconnected, production numbers. "That's Entertainment" ensues, along with romance between Tony and Gaby.

Directed by Vincente Minnelli, choreographed by Michael Kidd, and written by Betty Comden and Adolph Green.

Recently adapted as a stage musical, although the result was not a critical success. More famously, the "Girl Hunt" inspired Michael Jackson's "Smooth Criminal" video.

Tropes used in The Band Wagon include:
Retrieved from "https://allthetropes.org/w/index.php?title=The_Band_Wagon&oldid=1833243"
Categories:
Cookies help us deliver our services. By using our services, you agree to our use of cookies.