Everything About Fiction You Never Wanted to Know.
Jump to navigation Jump to search
/wiki/The Beach Boyscreator 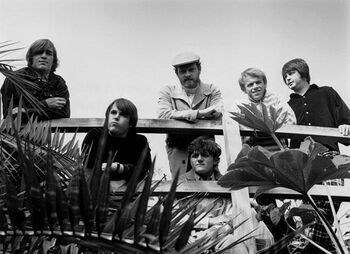 The Beach Boys were America's preeminent pop band in the early-to-mid Sixties. Originally composed of brothers Brian, Carl, and Dennis Wilson, their cousin Mike Love, and their friend Al Jardine. Later included songwriter Bruce Johnston, and South Africans Blondie Chaplin and Ricky Fataar. They are often regarded as America's answer to The Beatles, despite releasing their debut album two years before the Fabs.

Contrary to what one might expect, The Beach Boys have one of the longest and most fascinating stories of any band in recent history. Before the band even got started professionally, they had been singing together for years, playing at school functions under various names like Carl and the Passions and Kenny and the Cadets. They got their actual start basically out of Brian Wilson's garage; one labor day week-end in 1961; the Wilson brothers' parents went on a business trip to Mexico, and while they were gone, they recorded their first song, "Surfin'", in the garage. After that hit the local radio, they signed on to Capitol Records and quickly climbed the charts as the premiere Surf Rock band of the nation. They are often credited for popularizing the California culture throughout the country. However, the stress of touring and the competition from The Beatles led to Brian Wilson suffering a nervous breakdown, and retiring from touring. While the rest of the band toured (with first Glen Campbell and then Bruce Johnston taking Brian's place), Brian stayed home writing and making use of the studio talents of The Wrecking Crew, leading to such classics as "California Girls", "Help Me Rhonda", and "Please Let Me Wonder". This eventually fostered into what some critics call the greatest pop album of all time: Pet Sounds. Pet Sounds brought a whole new depth to the music, with advanced production techniques and powerful lyrics on such subjects as loneliness, youthful longing, self-isolation, and the power of wordless communication. Paul McCartney has said that Pet Sounds was a major influence on The Beatles' own landmark album Sgt Peppers Lonely Hearts Club Band. (Not coincidentally, if a critic doesn't call Sgt. Pepper the greatest pop album in history, he or she probably thinks it's Pet Sounds.)

From there, however, the story becomes a long, tragic string of practically nothing but It Got Worse. After Pet Sounds was released, Brian Wilson intended to top it with a revolutionary new album called Smile. However, lack of support from anyone combined with his ailing psyche combined with his copious drug abuse combined with a royalty lawsuit led to the album's cancellation in 1967. The band instead released Smiley Smile, which combined what the rest of the band felt were the stronger Smile tracks with some new, supposedly more commercial material (as opposed to the "weird" Smile songs). The album flopped, and from there, The Beach Boys struggled to just barely continue scraping the Top 40 for the rest of the 60's into the early 70's. During this time, Brian remained holed up in his room, Dennis Wilson became friends with Charles Manson, and the Wilson brothers' domineering father Murry Wilson sold their entire song catalog for a paltry sum of $750,000 (a catalog which is estimated to be worth at least $75 million today). The band's 1973 album Holland was artistically ambitious, but a commercial failure. At this point, it seemed as if the group was done.

Things started to look up in 1974 when Capitol Records released a Greatest Hits Album, Endless Summer, which not only went triple platinum and restored the band's commercial fares, but also propelled them back into cultural relevance. They decided to start recording again and attempted to lure Brian Wilson back into the studio with them. During this time, Brian was being subjected to therapy under the control of Dr. Eugene Landy. Through his unconventional therapy, he was able to make Brian slightly healthier and willing to work with the group again. He produced two albums, 15 Big Ones and Love You under this deal, and also re-appeared on stage with the band. But looking back, it's clear that Brian wasn't really well enough to do that sort of thing again, and he started slipping back into his former habits. Mike Love took over leadership of the band at this point, which many regard as the point at which the band jumped the shark.

During the times Brian Wilson was out of the picture, Carl and Dennis Wilson generally wrote songs in his place. Both created very memorable, beautiful music, with Dennis Wilson even writing his own solo album, Pacific Ocean Blue, which is now regarded as being just as amazing as anything Brian ever did. However, Dennis was also prone to alcoholism and self-destructive behavior, and he died in 1983 in an alcohol-related drowning incident, diving into the water at the Marina del Rey to search for personal effects he had thrown off of his beloved yacht, the Harmony, and hitting his head on one of the boats in the harbor. At President Reagan's request, he became one of few civilians to be given a burial at sea.

The Beach Boys basically coasted along for the rest of the 80's and 90's, their only major blip on the radar being the 1988 hit "Kokomo". As Brian Wilson was falling back into his former habits, he was subjected to Landy again in 1982, and for the next 10 years, Landy would not only treat Brian's illness in extreme and questionable ways, but also fully integrate himself into his business and musical affairs, isolate Brian from his friends and family, and leech thousands of dollars off of him year after year. A court case in 1991 was successful in separating Landy from Brian. He recovered magnificently, and in 1996, he was persuaded to briefly rejoin The Beach Boys as a producer. However, all that came from that was Stars and Stripes Vol. 1, a phenomenally weak album of Beach Boys covers sung by second-rate country artists. Any chance of a reunion that actually counted for something was cut short by Carl Wilson's death from cancer in 1998.

In 2012, on the 50th anniversary of the band's first album, Surfin' Safari, the unexpected happened: a full reunion of the surviving Beach Boys, including Mike Love, Brian Wilson, Bruce Johnston, Al Jardine and David Marks (who replaced Jardine for the first few albums, and who reunited with the Love/Johnston touring line up most recently), took place for a 50th Anniversary world tour and the recording of a new studio album, co-produced by Love and a rejuventated Brian Wilson.

Numerous artists have cited them as a major influence, including Animal Collective, The Ramones, Alice Cooper, Elton John, Weezer, The Flaming Lips, basically the entire indie rock genre, and The Beatles themselves.

Discography:
The Beach Boys provides examples of the following tropes:
Retrieved from "https://allthetropes.org/w/index.php?title=The_Beach_Boys&oldid=1704623"
Categories:
Cookies help us deliver our services. By using our services, you agree to our use of cookies.