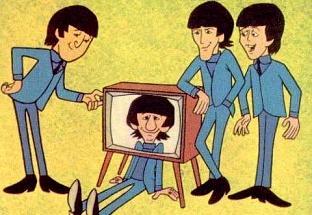 A cartoon series that ran from 1965 to 1969 following the wacky hijinks of The Beatles. Notable for being the first cartoon about actual people made for television.

The series followed a Two Shorts Format, with each short separated by two singalong segments. The singalongs would always start with either John Lennon, Paul McCartney or George Harrison trying to introduce the song and encourage the viewers to sing along, and Ringo Starr interrupting to try and "set up the proper mood" with props.

Although the series was a colossal success when it debuted, it faded quickly as the Beatles themselves evolved their music and personalities. Eventually, the show was quietly scooted out of the way to make room for Jonny Quest, as ABC's Saturday Morning lineup was being dominated by action/adventure shows at the time, while the cartoon was getting more surreal.

Produced by Al Brodax (who would later go on to produce Cool McCool and Yellow Submarine) for King Features, who produced a number of other cartoon series based on its own popular comic strips. Notable in that making the show was literally a world-wide effort, and an early example of farming out animation overseas to save money. A majority of the production was done in England, but episodes were also farmed out to studios in Australia, Canada, and Holland. This lends the show a bit of discontinuity when it comes to animation style; the Australian episodes are particularly prone to poor quality because Australia had a limited animation industry before the show arrived there and therefore fewer experienced professionals to draw from.

Many of the same people from the English studio who worked on the cartoon, as well as the American producers, went on to work on Yellow Submarine (including Lance Percival as Old Fred), one of the many reasons why the Beatles initially wanted nothing to do with the film.

Tropes used in The Beatles (animation) include:
Retrieved from "https://allthetropes.org/w/index.php?title=The_Beatles_(animation)&oldid=1502969"
Categories: