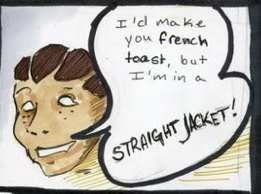 The Tagline: "A comic vaguely about cannibalism."

Synopsis: The plot of the comic follows an alcoholic, a geomancer, and a cannibal as they take down a brainwashing cult. There's also pirates and robots! Updates Tuesday, Thursday and Saturday.

The Link: Can be found here.

This webcomic suffers from a severe case of multiple personality disorder in that it can't make up its mind whether its about Scientology, The Environment, Girl Power, gender confusion, or eating people. It starts out with what appears to be a Bad Guy Bar, wove its way around a The Cult, and seems to have moved on to Nebulous Evil Organization. There are undertones of Magic somehow, and then overtones of Magic somehow, and then seems to take a break from Magic somehow to settle in on the dreaded Character Development. Within the first fifty pages, Plot was introduced and Blondes were declared to be "Things." In the next fifty pages, it was declared that The Alcoholic does something around the bush before moving on to make a fool of himself and attempting to fight Pirates over what looks to be a mysterious document of some sort.

Tropes used in The Bend include:
Retrieved from "https://allthetropes.org/w/index.php?title=The_Bend&oldid=1643431"
Categories: