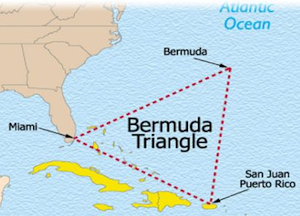 The Bermuda Triangle is a popular place for works of fiction to place mysterious events, especially the disappearances of ships and airplanes. Often, it will turn out that something really weird is involved with the area, such as aliens, paranormal activity, Eldritch Abominations, or Atlantis. If the events are of human origin, it's still something weird like an Ancient Conspiracy or dangerous Cult.

Part of the Hollywood Atlas. The triangle is a region in the Atlantic Ocean, much of which is south-west of the coast of Bermuda. Before it became popular in pure Speculative Fiction, the triangle started out as an Urban Legend. Although that legend has since been discredited, with the number of disappearances being no higher or lower than any other part of the ocean of similar size and weather, it continues to live on through its popularity in fiction.

No real life examples, please; sorry, but we have to cite Wikipedia's "reliable sources" rule on this one.

Appearances of the Bermuda Triangle in fiction include: