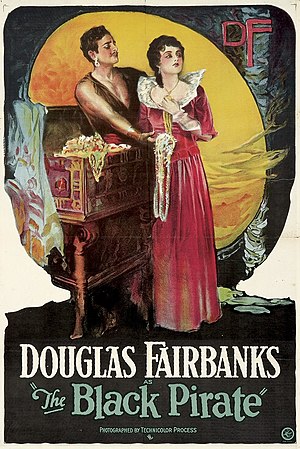 In The Black Pirate, Douglas Fairbanks, king of silent action adventure pictures, plays a nobleman who has vowed to avenge the death of his father at the hands of pirates, and once upon the pirates' vessel, protects a damsel in distress (Bessie Love) taken hostage by the band of thieves.

This swashbuckling tour-de-force by Fairbanks is most significant for having been filmed entirely in two-strip Technicolor, a process still being perfected at the time, and the precursor to Technicolor processes that would become commonplace by the 1950s. Fairbanks wrote the original story under a pseudonym, and Albert Parker directed.

The Black Pirate was added to the National Film Registry in 1993.

Watch it here, on this very wiki, or download it from the Internet Archive.

Tropes used in The Black Pirate include: