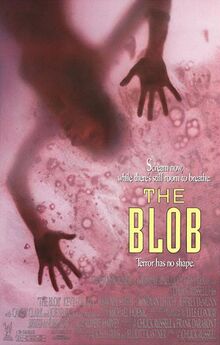 A horror/monster film from 1958, about a killer amoeba from outer space. The film is notable not only for its memorable villain, but also for being Steve McQueen's film debut. It spawned a sequel in 1972 and a remake in 1988.

As the film begins, a small meteorite drops to earth near a small town. It contains a tiny, jelly-like substance which quickly attaches itself to a nearby hermit, who is subsequently brought to town for medical attention. Unfortunately, The Blob grows and consumes the hermit and the medical staff, observed only by a pair of teenagers. Of course, when they try to raise the alarm, no one believes them -- until The Blob attacks a crowded movie theater. Eventually deducing that the creature can be defeated only by extreme cold, the town collects all available fire extinguishers and blanket it in CO2, freezing it solid. In the end, The Frozen Blob is deposited deep in the Arctic, where it is presumed it will remain frozen.

In the sequel Beware! The Blob (also known as Son of Blob), a construction crew working on a new Alaskan oil pipeline has uncovered the frozen Blob. Not knowing what it is, the construction foreman brings a small chunk of it home to southern California with him, upon which it promptly escapes, grows and terrorizes the community, slinking through the sewers. Eventually entering the brand new bowling alley (and attached, still-under-construction ice-skating rink), The Blob is ultimately defeated by freezing the ice rink floor. A decidedly campy film, Beware! nonetheless plays many monster movie tropes dead straight, particularly the Cassandra Truth-spewing heroes and the Obstructive Bureaucrat who runs the bowling alley.

The Blob was remade in 1988, using the original story with a few minor changes:

Another remake of the original film was announced in 2006, to be penned by the writers of the House of Wax remake.

For generic monsters (and Cute Monster Girl) made of slime and other types of goo, see Blob Monster.

Not to be confused with a certain X-Men villain, or any Wii games.

Tropes used in The Blob include:
Retrieved from "https://allthetropes.org/w/index.php?title=The_Blob&oldid=1368549"
Categories: